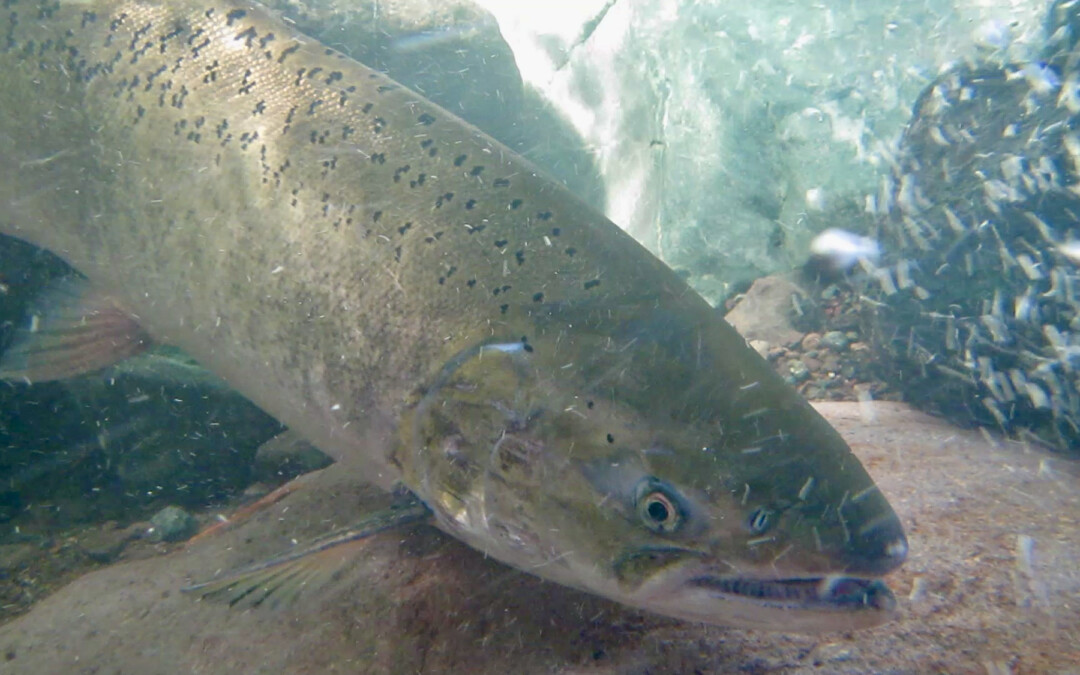 We all feel like celebrating over this news: Sonoma Creek has salmon again!

Research Program Manager and aquatic scientist Steven Lee assembled this inspiring video of the Chinook (King salmon) as they made their journey upstream and began settling into their spawning habitats.

The abundant rainfall that Sonoma County received in late October created ideal conditions for Chinook (King salmon) to return to Sonoma Creek. Several streamside residents contacted Sonoma Ecology Center with the news and sent in photos and videos of salmon transiting their favorite creek viewing spots. In response, SEC’s Richard Dale and Research Program Manager and aquatic scientist Steven Lee jumped into action and ran out to the creeks to document the event. One outcome was this amazing video Steven assembled of the salmon as they made their journey upstream and began settling into their spawning habitats.

Chinook salmon spawn in Pacific streams from California to Alaska, and their numbers have been in serious decline for decades; a cause for concern for fishers and environmentalists throughout the West Coast.

Chinook were known to have successfully spawned in Sonoma Creek a few years ago, and it’s possible some of these are their offspring returning to spawn. The Sonoma Ecology Center has conducted studies of young fish migrating out of Sonoma Creek and found, in addition to steelhead, a surprising number of young Chinook are heading out to the bay and ocean. It’s hard to know for sure if these fish originate from Sonoma Creek – there are many salmon released from hatcheries in the Central Valley who could be making their way up our waterways. Some of the fish we observed do have clipped adipose fins – an indication that they were raised in a hatchery. However, many of the fish in Sonoma Creek right now lack this indicator and their size suggests that they are the right age to have come from the last run here. 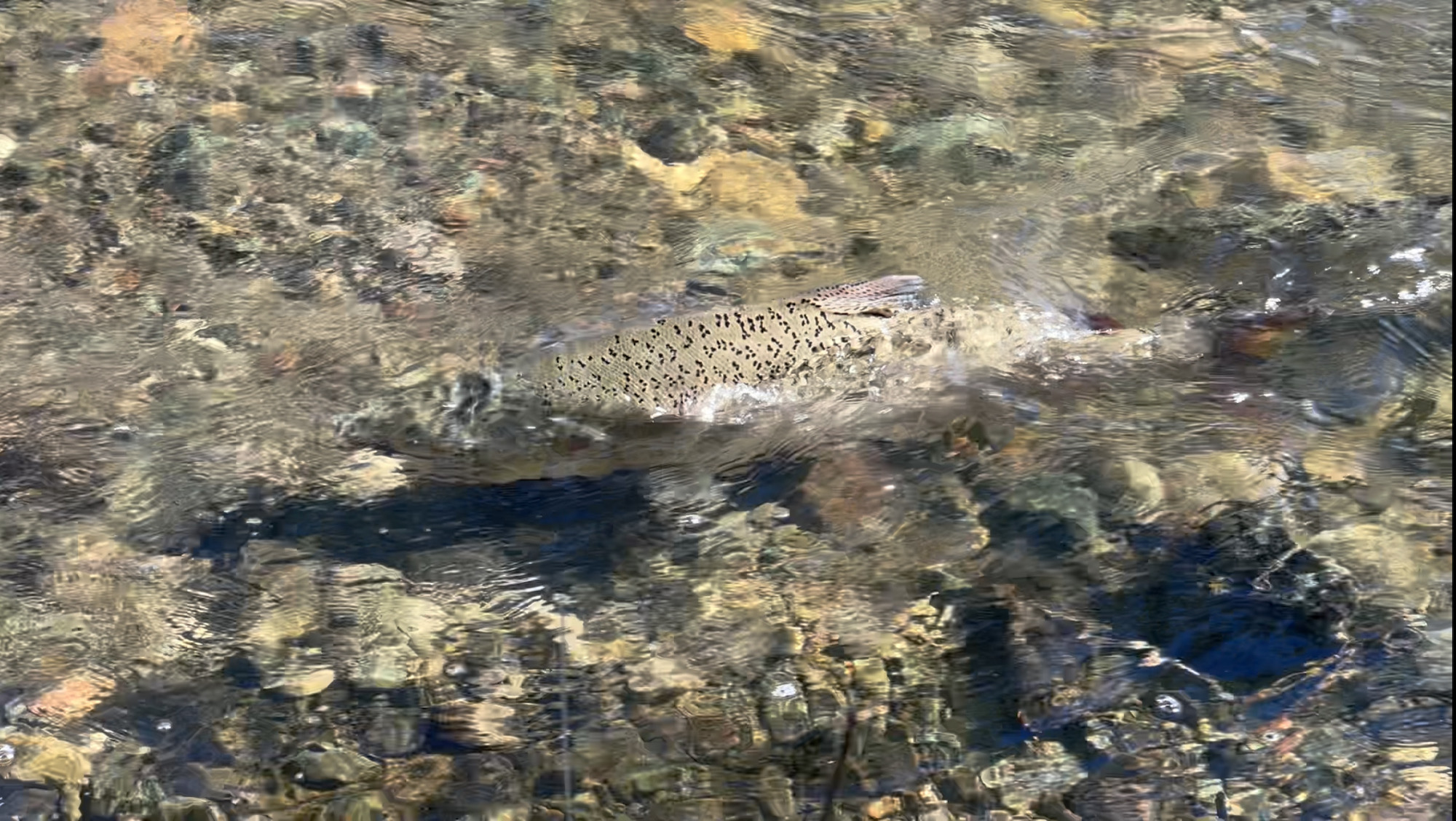 The video shows both male (bucks) and female (hens) Chinook– males present as redder in color and with a hooked snout while females tend to be smaller and more torpedo shaped. Both must go through significant changes making the transition from ocean dwelling to freshwater fish, and to prepare to reproduce. Both male and female Chinook show up to spawn about the same time in our streams, as water starts to drop after a larger, late-fall storm. Females seek out a pool to lay their eggs, typically in deeper water with larger gravels than our other resident salmonid–steelhead. A female will defend her nest, or redd, until she can no longer maintain her strength and dies, about 8-12 days after spawning. Males compete for spawning females, and dominant, generally larger males spawn more successfully than smaller males, but several males will often attend a spawning female, who can lay eggs several times in her redd. A dominant male will often leave right after spawning to court another female, so less dominant “satellite” males that wait are often also reproductively successful. Both male and female Chinook decline and die within a few weeks of arrival at their spawning location. There’s been a lot of territorial sparring going on (you can see an example of this at 1:31 in the video, and some spawning).

From what we can tell, if water levels hold we can hope to see these salmon around for the next couple of weeks! If you choose to try to spot Chinook during their time here please take proper precautions to not disturb the fish in Sonoma Creek. Stick to established trails in an effort to prevent erosion and try not to walk into the water to see the salmon. These fish are on the lookout for predators and we can do our best to not frighten them while they are spawning. If you are visiting a State Park such as Sugarloaf Ridge State Park please respect all signage and trail closures. 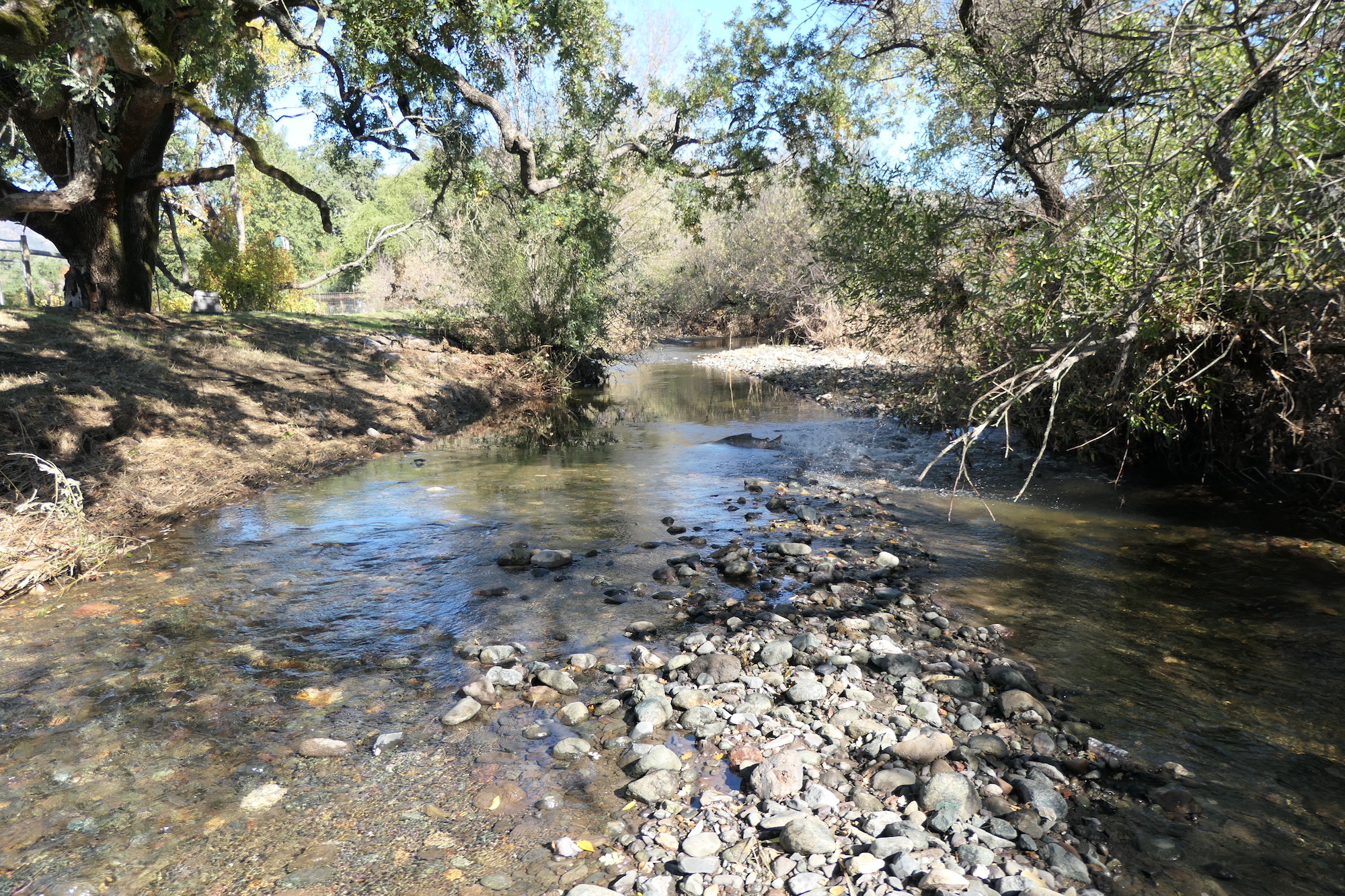 A Chinook swimming upstream with its fin exposed in Sonoma Creek

Much of the research SEC conducts is focused on Streamflow and aims to  ensure there is adequate water for fish, such as these Chinook, year-round in our watershed.

Healthy streamflow helps support healthy salmonids and creates a more hospitable environment where they reproduce and rear successfully and hopefully see their  population sizes increase. After the drought year that we still find ourselves in despite the rainy weather, it’s a sign of hope to see these fish return. However, water must remain in our creeks to continue to support these impressive salmonids, an issue we tackle by helping local residents find alternatives to pumping water from Sonoma Creek and its tributaries in the drier summer months. You can learn more about SEC’s Research Program and get involved by visiting our Streamflow Stewardship Program page.

Pretty cool to see what some rain (and a few million years of evolution) does for our Valley!