How Wild Animals Cope with Wildfire 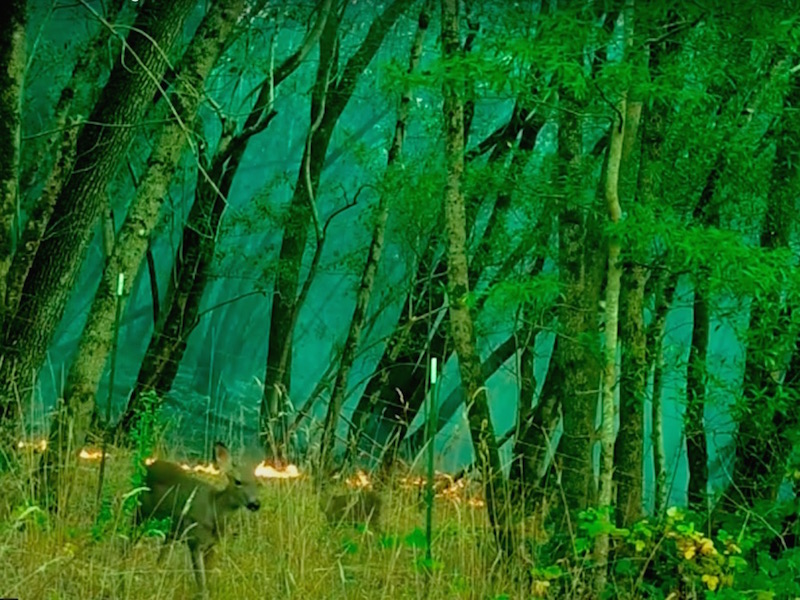 Humans fled by the tens of thousands in Sonoma and Napa counties this summer as the Glass Fire bore down on their communities. But other species’ homes and communities were threatened too, and ultimately more than 67,000 acres, most of it wildland, burned.

Bigger and more frequent fires in the North Bay and across the West have led many to wonder how wild animals are faring amid the flames and smoke. What happens to them when fires come? What do they do after the fires are gone?

Regarding how many animals are killed by wildfire, solid data is hard to come by, but experts believe large fires can cause a short-term hit to certain animal populations—and fast-moving fires pushed by powerful, climate-change-driven winds are probably worse for them.

Luckily, population declines caused by fires do not appear to be permanent. A recent National Geographic article states that “Scientists don’t have any good estimates on the number of animals that die in wildfires each year. But there are no documented cases of fires—even the really severe ones—wiping out entire populations or species.”

Wes Gray, a veteran natural resource manager for California State Parks, put it bluntly in an article by Peninsula Open Space Trust: “All the animals that can get out of the way—mountain lion, bobcat, coyote, deer and birds—they just run away from the fire, simple as that. And what can’t run will hide, mostly burrowed underground.”

At Sugarloaf Ridge State Park, which is operated by Sonoma Ecology Center, camera footage taken during wildfires shows deer and other perambulating animals avoiding the flames with apparent ease. In this short video created and narrated by Breck Parkman, a retired State Parks archaeologist and SEC Board member, footage of the Glass Fire in late September, taken from a camera in Sugarloaf’s McCormick Addition, shows deer hopping away just two minutes before the flames arrive:

After the fires are gone, many species do better than before. The loss of habitat is only temporary, and after rains arrive to a burned landscape the result is often more food for all, as new vegetation grows in cleared-out areas.

“In chaparral, for example, all the new vegetation after fires is young, fresh, green, at ground level, and you can walk right to it,” said Sonoma Ecology Center Senior Project Manager Caitlin Cornwall. Similarly, she said, “Birds show up in numbers near burning areas, where they eat and wait out a fire. After the fire is gone, some species, such as woodpeckers, move right in to burned areas and have more food and habitat than before.”

The habitat loss may be temporary, but it is still widespread. Dan Levitis, a biologist and science educator for Sonoma Ecology Center, summarized the effect of this year’s fires on California’s biggest cat, the mountain lion: “With more than 4 percent of the state burned this year, and most of that in mountain lion habitat, about 10 percent of what is considered suitable habitat has burned.”

Yet the big cats aren’t gone, and Sonoma Valley residents already are reporting sightings. In a post on Nextdoor, one local man described an encounter on Oct. 18 in Montini: “Heading home, just before descending the ‘stairs’ toward 4th Street trailhead, we saw a mountain lion maybe 50 yards uphill from the point the trail crosses the dirt road in the meadow.” He said the lion did not flee or follow them when they passed.

“There is no surprise to see a lion up above Sonoma—this is an area well frequented by lions,” said wildlife biologist Quinton Martins, who runs Audubon Canyon Ranch’s Living with Lions program and is an expert on North Bay mountain lions’ behavior and whereabouts. Martin said there is good reason to believe lions can and do cope with wildfires. “These cats have evolved in this fire-driven system, so they would have been exposed to big fires before,” he wrote in an email, adding that after the Nuns Fire in 2017, researchers found the cats not only surviving, but staying in their previous ranges.

Even when mountain lions are forced to shift ranges, Martins said, “their behavior is surprisingly plastic and their tolerance for each other admirable.”

Meghan Walla-Murphy, wildlife biologist and lead scientist of the North Bay Bear Collaborative, which Sonoma Ecology Center hosts, said she has been “deep in the bear/fire world” this summer and that there is ample evidence of ursines coping well with fire too.

Recently, she said, “I was on a large 10,000-acre private parcel of which half burned in the Glass Fire. It was amazing to see how quickly the bears and other species had returned and were feeding on old walnut trees and remaining blackberries. I saw at least four individual sets of tracks of different sizes. In following out these trails, the bears were moving in and out of the burn zones into unburned areas. Many trails showed that this was a regular movement, not just a onetime occurrence.”

Walla-Murphy said bears know the landscape well and are probably very good at finding unburned patches of wildland. Meanwhile, she said, wildfires tend to sweep away doghair thickets of pine, creating space for elderberry, ash, black oak and other food-source plants to grow—leading again to long-term benefits for native species.

“In other fires that I have been investigating over the past three years, the story is pretty much the same,” she said, “the bears and other species return within days of the heat subsiding.”

When it comes to animals’ ability to cope with wildfire, Walla-Murphy emphasized the importance of “connectivity”—large enough tracts of contiguous permeable habitat.

“Overall in my observations, beginning with the Tubbs Fire, I am astounded by how quickly the wildlife rebounds and the food chain that supports them.” 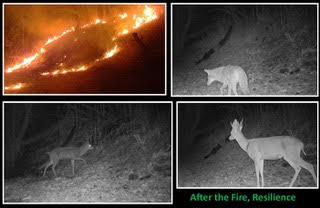 Recently, Parkman shared a small collage of animals—two different deer and a coyote—returning to burned Sugarloaf land a few days after the Glass Fire. Labeled “After the Fire, Resilience,” the images reminded Parkman that “The grass will turn green by winter’s end and the wildflowers will bloom come spring. Birds will sing once again and, in time, the park will embrace hikers, campers, and stargazers, too.”

“Even in the worst of times,” Parkman continued, “Nature is resilient and so are we. Life returns, even if it’s to a new normal. Here’s to looking forward to the day we all return.”