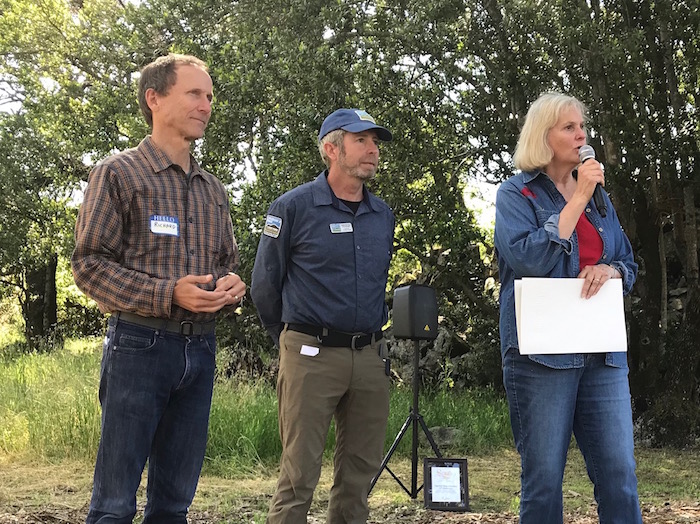 Memorial Day was especially memorable for us fans of Sugarloaf Ridge State Park, as the park celebrated 50 years of being open to the public. Many people joined us throughout the day, taking part in guided nature hikes and history hikes, great food, and a lovely reunion event during which park leaders old and new recalled a half-century of improvements, challenges and successes.

Those challenges included two recent closures, and Sonoma Ecology Center played a central role in both reopenings. In 2011, a budget shortfall led the California State Parks system to shutter several of its parks, including Sugarloaf. In answer to this problem, Sonoma Ecology Center formed Team Sugarloaf – a group of five nonprofits with SEC as the lead entity – and took over operations under the auspices of State Parks, allowing Sugarloaf to reopen the following year.

The second closure followed the historic fires of October 2017, which burned more than three-quarters of the park. Multiple trails, bridges and other structures needed rebuilding, and Sonoma Ecology Center – with the indispensable help of donors and our tireless volunteers – got it done, fully reopening the park within a year at a fraction of the estimated cost.

Today Sugarloaf is thriving – in fact we’re expanding its services, including a Spanish-language program, Senderos Naturales, that brings underrepresented minorities out into nature. We’re also continuing our fantastic Summer Science Camps, California Naturalist classes and other educational opportunities at Sugarloaf, as well as our science-based monitoring and stewardship of the park’s many waterways (which form the headwaters of Sonoma Creek), and much more.

All that is reason to celebrate, so celebrate we did last Monday, May 27, with local leaders in attendance including Supervisor Susan Gorin. Delicious food was provided by the Tri Tip Trolley, and beer and wine were donated by Henhouse Brewery and St. Francis and Landmark wineries.

Of course those services aren’t free – and ever since Team Sugarloaf reopened the park in 2012, Sugarloaf has received no direct funding from the state or federal government. Today it runs on it runs on individual donations, memberships, and visitor fees.