How Kenwood Marsh Turned Sonoma Valley into a ‘Fountain of Fountains’ 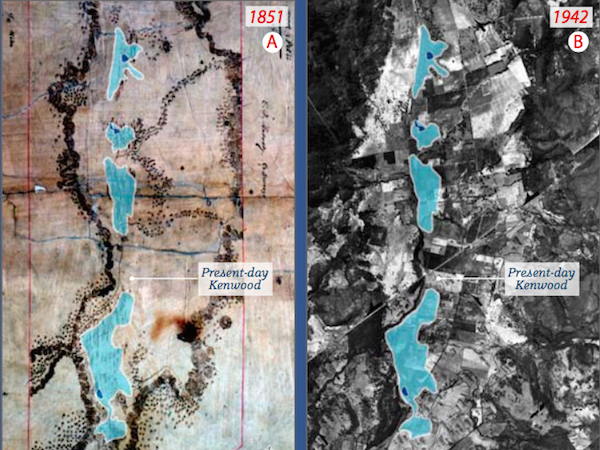 “Sonoma is a fountain of fountains.”

So wrote Father Jose Altimira in 1823, while seeking the ideal location for Mission San Francisco Solano, California’s northernmost mission and Sonoma’s founding edifice. In writing those words—Sonoma es un manantial a manantiales—Altimira was underscoring a need we all share: for abundant fresh water, available year-round, even during California’s dry seasons.

Sonoma Valley, he observed, had plenty of water. As described in “An Introduction to the Historical Ecology of the Sonoma Creek Watershed,” a brief report published by Sonoma Ecology Center in 2008, Altimira settled in Sonoma because water poured so reliably from the region’s many creeks, springs and ponds. Natives told Altimira that even in dry years, “the permanent small waters are innumerable.”

That was then. Today, dramatic alterations to Sonoma Valley have led to markedly less water: smaller creeks, fewer springs and ponds, and a less reliable overall supply, especially during dry years. In studying how this came to be, scientists have realized that a major factor is the loss of key water features such as wetlands, which act as giant sponges, trapping rainwater during winter months and releasing it steadily throughout the year.

And in pre-colonial Sonoma Valley, there was no bigger or better example of such wetlands than the Kenwood Marsh.

A large 400-acre marsh complex in the northern (upstream) end of Sonoma Valley, Kenwood Marsh was a perennial wetland, meaning it held enormous amounts of fresh water throughout the year. When it rained hard, the marsh absorbed enough water to significantly reduce flooding downstream. When it didn’t rain at all, the marsh kept on slow-releasing its water, keeping waterways downstream (where Altimira put his mission) running fresh and clear and cold all year.

Today, nearly all of that wetland complex, which spanned from present-day Pythian Road to Glen Ellen, is gone. Without its tempering influence, or that of other perennial and seasonal wetlands, rainwater shoots down Sonoma Valley and into San Pablo Bay before it can recharge the groundwater or provide for keystone species like steelhead.

“Kenwood Marsh was an essential component of Sonoma Valley’s once-healthy water system,” said Richard Dale, executive director of Sonoma Ecology Center, who has studied the Valley’s past and present for over three decades. “We see its loss today in the reduction in seasonal streamflow here, and in increased flooding, erosion, groundwater depletion and other problems.”

Besides steelhead, the marshland was important habitat for other native plants and animals too, including some unique species such as the Kenwood Marsh checkerbloom. This endangered flower is so rare today that only 10 are known to exist in nature—and they are all growing in what remains of the Kenwood Marsh. (Because of its endangered status, harming, killing or possessing the plant is prohibited.)

“We lose vernal pools and wetlands more than any other habitat,” said SEC Restoration Program Manager Jason Mills. “Standing water isn’t seen as very desirable,” he said, and is frequently drained for agriculture or development.

As a result, “We’ve altered the hydrology immensely, because to divert all that water you have to channelize it. That’s what leads us to our flash flood conditions.” Originally, Mills said, “All those waters coming off Sugarloaf would have entered the big alluvial fan of Kenwood Marsh. But now there isn’t that area to absorb that runoff.” (Sonoma Creek’s headwaters are located in present-day Sugarloaf Ridge State Park, which SEC manages with its Team Sugarloaf partners on behalf of California State Parks.)

Besides flooding and the property damage that comes with it, other problems created by draining marshland include erosion, sedimentation, channel incision, groundwater depletion, and loss of the most productive and biodiverse habitats in our region.

Local historian Arthur Dawson, who co-authored that 2008 report and continues to collaborate with SEC, notes that Kenwood Marsh was only the largest of the Valley’s extensive wetlands.

“Another marshy area ran from north of the Plaza down to 8th Street East,” Dawson said, pointing to one of several examples. “Elders I interviewed in 2000 remembered huge flocks of waterfowl that would show up there during their migrations.”