Lions and Badgers and Bears: The Team behind Sugarloaf’s Amazing Wildlife Footage

On a foggy January morning, three Sugarloaf Ridge State Park volunteers gather at the Pony Gate trailhead with backpacks and hiking poles to complete what is for them, a typical volunteer shift– checking wildlife cameras placed around the park. Shuffling at first to warm up in the winter chill, they make the climb up the trail, commenting on park features along the way. “The trees are just coming back here from the fire in 2020. We were lucky, though, when the fire came through here our cameras made it – we even caught footage of CAL FIRE firefighters passing by!” says Guy Miller,  a Sugarloaf Ridge State Park volunteer of three years.

This crew of volunteers will visit three sites in total today – all part of a larger network of 41 cameras tracking and recording wildlife movement across Sugarloaf Ridge State Park and participating adjacent private lands. At a site beside a grassy meadow, the volunteers stop to switch out memory cards and batteries, steps that they will repeat at two more sites, covering several miles on foot by the time their shift is done. “You would be surprised who and what we’ve caught on camera here. This is how we know folks still come into the park to walk their dogs off leash. They show up on our cameras!”

Sugarloaf Ridge State Park Volunteers Guy Miller and John Hardman switch out batteries and memory cards at one of the Critter Camera locations.

But more than the occasional elicit dog walker is found by this project. Discoveries abound, as volunteers spend time caring for cameras and meticulously checking imagery. At the park headquarters, many hours are spent in front of computer screens, reviewing video and still images. Often the images are of nothing at all, the camera likely triggered by wind or movement of tree shadows in bright sunlight:  “The biggest challenge [to our work] is the movement of vegetation causing the cameras to trip and record false images” says Miller. But sometimes the screen reveals something special, something uncommon.

“We’ve got video of two bears walking side by side together, foxes with their kits, and otters playing together. It’s really incredible” says Dan Levitis, Sugarloaf Ridge State Park Volunteer Coordinator who oversees many aspects of the cheerily dubbed “Critter Cam Crew.” “We found out about bears living in this area because of the project, and we also caught footage of a badger. We didn’t have strong evidence that they were here before we caught them on camera. We now know a lot more about where coyotes are moving, where otters are active, and where foxes are breeding. We also have a good sense of when deer are rutting because of footage we have of male deer fighting. There is so much we wouldn’t know without these cameras, or our team!” 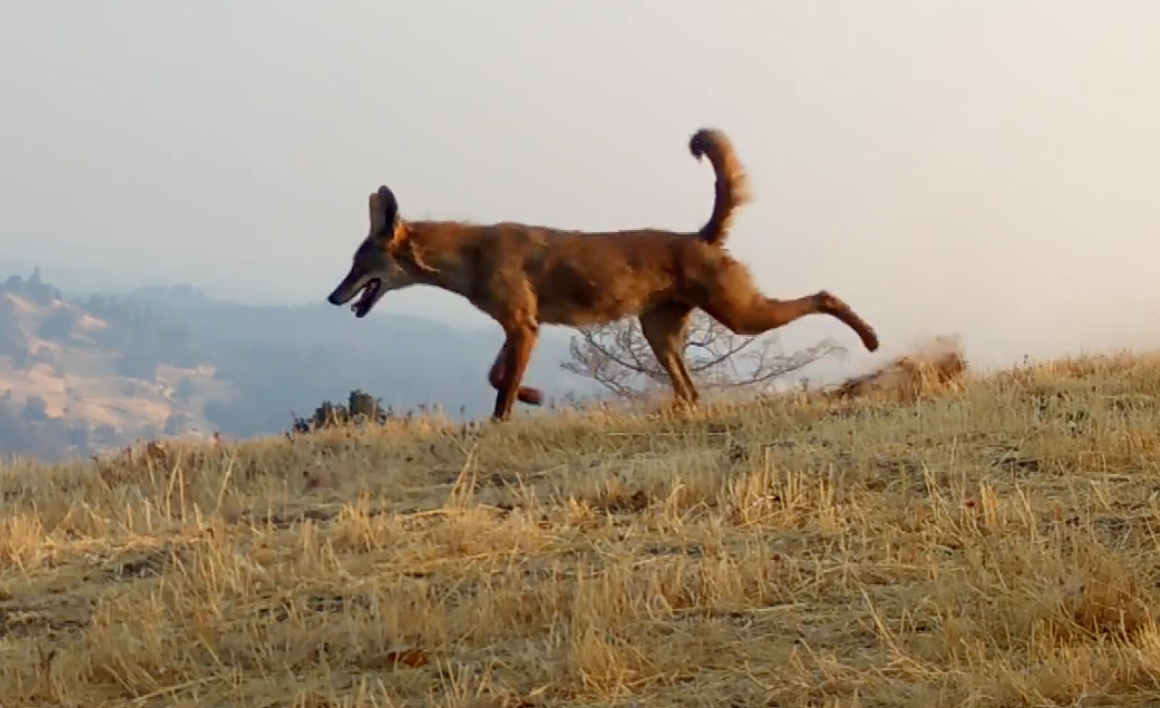 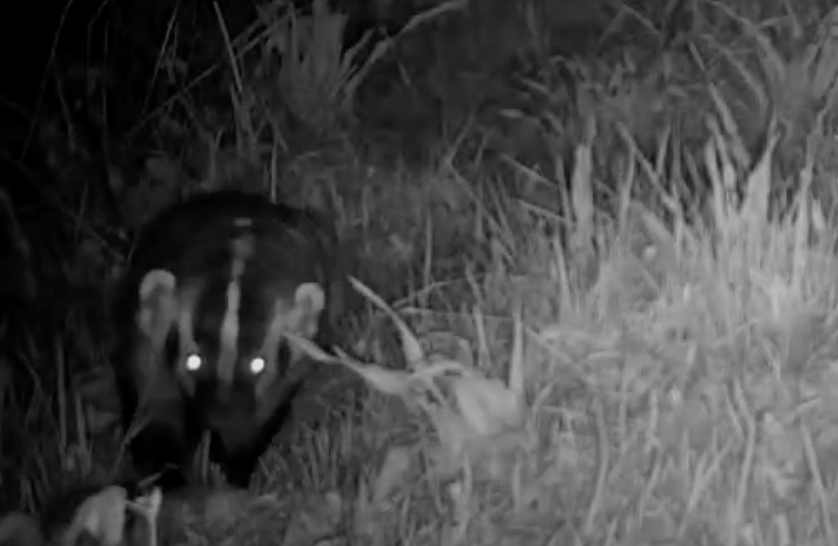 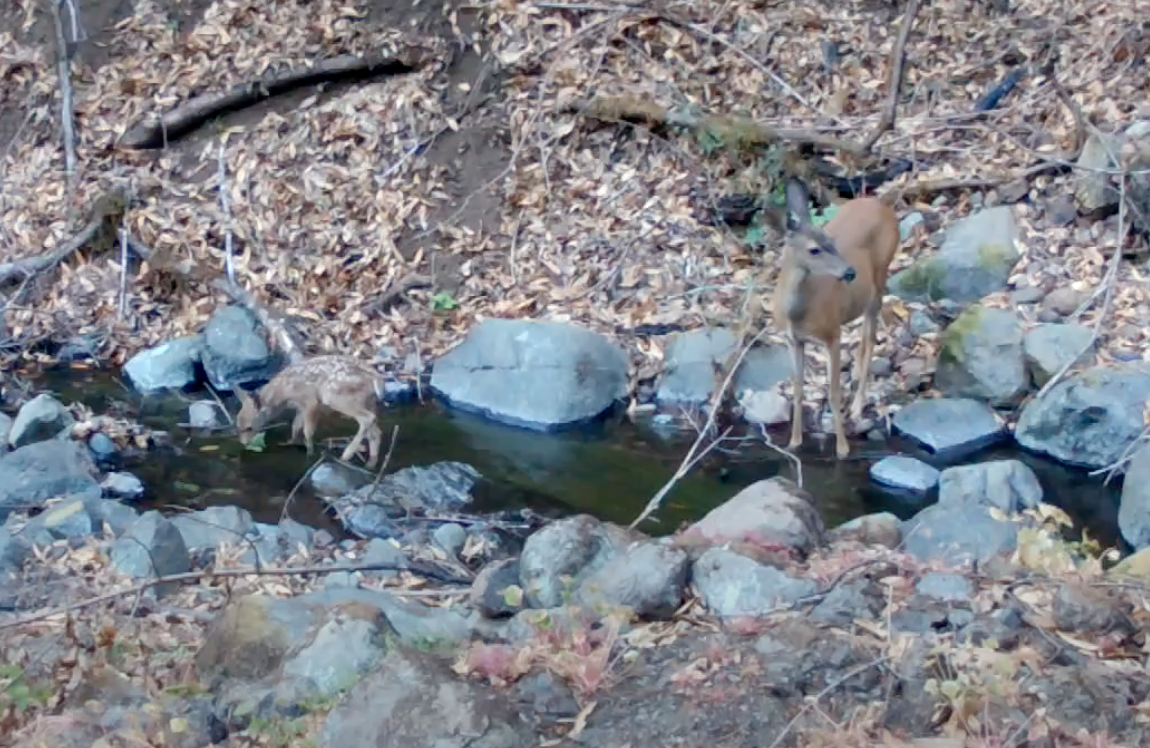 Many discoveries about local wildlife have occurred thanks to the work of the Critter Cam volunteers. We now know that badgers live in the Mayacamas in part thanks to observations made from a Critter Cam photograph above.

Growing knowledge about wildlife in this part of the Mayacamas is in large part a result of Sugarloaf Ridge State Park and Sonoma Ecology Center volunteers, knowledge that has evolved significantly over the 11 years since this park management partnership began.

The popular and beloved project was founded by Bill Miller, a Senior Environmental Scientist for California Parks and Recreation (State Parks) who lived at Sugarloaf for several years and Lou Kinsler, a Sugarloaf Ridge State Park volunteer. They began the program placing cameras near Miller’s home out of curiosity about what wildlife were up to. As time and interest grew, Bob Lutolf, a longtime Sugarloaf park steward, volunteered to coordinate the young program. He took over and put in place formal protocols for tracking the video and for recruiting volunteers. “Our volunteers really had to lean in and start noticing where there was animal activity. Over time, our team got much better at this – and they learned how to operate cameras, place them, and have now captured tens of thousands of images and videos of different species.” Volunteers hone their skills through trial and error at camera placement and gaining a sense of where they’re most likely to catch an animal passing through. “The placement of cameras is a critical part of the program. Like humans, the animals in the park typically travel along roads and trails. Cameras must be carefully placed to have the best chance to record animals. Numbers of hikers on the trail, the angle of the sun, high winds, and other factors, all affect the chances of capturing successful images.” says Guy Miller (not related to Bill).

While the wildlife images captured are heartwarming and educational, the footage also contains important information that benefits human and animal relations. In recent years, the team was able to discern that black bears, newly returned to the Mayacamas, were wandering closer to the Park’s campground, allowing park staff to respond with bear resistant food lockers and new wildlife protocols that ensure the bears don’t become habituated to humans.

As clips are compiled, videos go to a variety of agencies outside of State Parks and Sonoma Ecology Center. Mountain Lion footage is sent to Quentin Martins, a local wildlife biologist who operates the “Living with Lions project.” Footage from private properties is sent to their respective owners. Otter footage is sent to the River Otter Ecology Project, and badger footage to the Paula Lane Action Network. Some footage is shared with the public to build awareness about local wildlife. Recently, part of a new protocol, footage is uploaded to a scientific database that assists discovery and analysis of wildlife on local and global scales.

The long term goal of the project has evolved. Initially, the “Critter Cam Crew” was a project of passion, supported by engaged volunteers. The program still offers the thrill of catching wild animals on camera, but its purpose has expanded to support scientific endeavors. Sugarloaf now uploads wildlife imagery to a worldwide database called Wildlife Insights. (You can view Sugarloaf’s contributions to the database here.) The database is a federally-funded program where professional and citizen scientists around the world upload wildlife camera data for scientific analysis. Its goal is to create an efficient way to process large amounts of data and allow scientists to track when and where species occur over different scales. Wildlife Insights provides support to Sugarloaf Critter Cam Crew volunteers, sifting through hundreds of image captures they record each week, using artificial intelligence to determine “false captures” (when the camera is triggered by wind, shadow, or foliage). It also helps identify some species automatically, saving the crew time and energy after what is often a long day of hiking and reviewing imagery.

Information the crew gathers and uploads to the database aids other local camera trapping teams, with the long term goal to gain new and significant insights about local wildlife. “Our team hopes to learn more about how different human activities in and around the park over time affect wildlife activity.” Says Levitis. “Topics such as whether wildfire smoke or domestic dog walking affects behavior of other species are subjects we’re interested in. Data gathered over time can track activity in response to temperatures or rainfall, insights that may be valuable as our environment is altered by climate change.” Volunteer Guy Miller, adds, “My hope for the future of the program is that our data is used to determine the health of local ecosystems, and we can use it to ensure that animals have a safe habitat in which to live.”