The Project to Uncover SDC’s Biodiversity 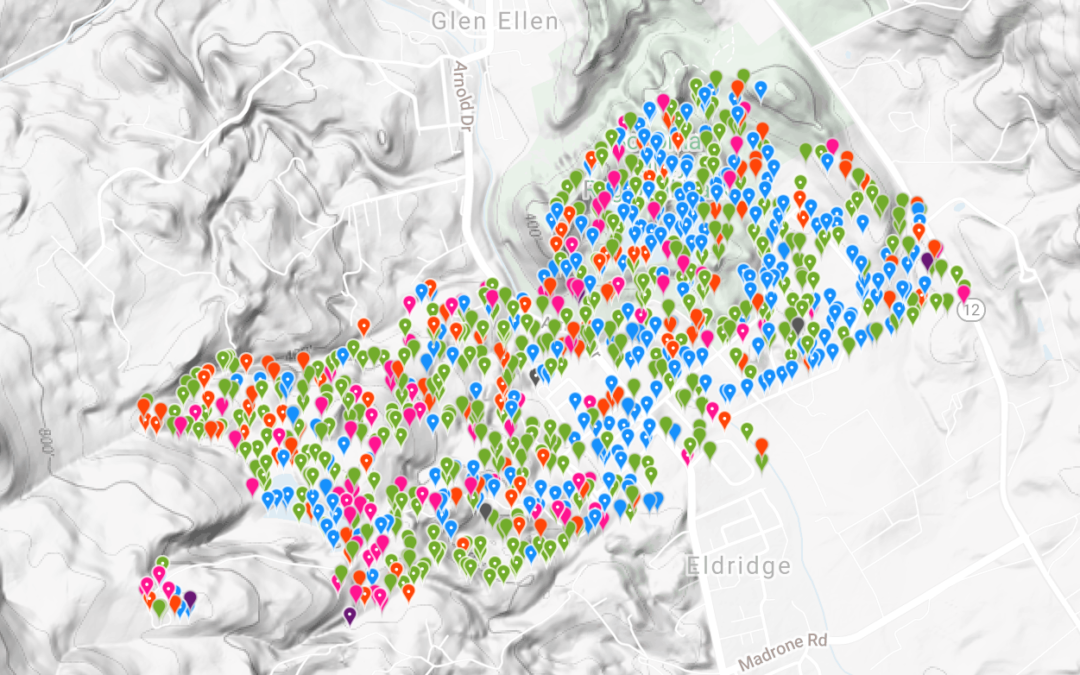 When taking a walk through the Sonoma Developmental Center (SDC) campus, one is struck immediately with its striking buildings and the plane trees that arch over this charismatic and much-discussed property. However, there’s much more than first meets the eye in this corner of Eldridge: a network of life exists in every one of SDC’s 945 acres, from rare mushrooms and snails, to the big cats that utilize the section of the Sonoma Valley Wildlife Corridor traversing the SDC property. Over the past 3 years, community scientists and Sonoma Ecology Center (SEC) staff have been recording the species that live on the SDC property using the iNaturalist app to understand more about the value of this particular property, for people involved in and affected by its future and for the interconnected web of species that call SDC home.

The most recent iNaturalist observations for the Sonoma Developmental Center property. Click through to see them all.
The project to uncover more of the biodiversity of the SDC property began in January 2019. It now has over 12,475 observations of 1,097 recorded species of animal, insect, plant, and fungi on iNaturalist (you can visit and interact with the results here). By coming to understand how many different plants, animals, and insects live in this corner of Eldridge, SEC has learned about the efficacy of the Sonoma Valley Wildlife Corridor, where invasive French broom needs to be removed, where vernal pools exist based observations of seasonal rushes,  about the aquatic life that makes its home in SDC’s riparian corridor, and many other findings. “We’ve identified endangered California freshwater shrimp, and salmonids, both Chinook salmon and Steelhead trout. Knowing the aquatic species will inform how the creek corridor and the wildlife corridor on SDC are protected, for perpetuity hopefully” says Wendy Hayes, SEC biologist. “Sections of Sonoma Creek’s channel within the SDC are important dry-season refugia. They have deep pools where we see sensitive aquatic species surviving because of full shade, deep cool water, and meandering creek beds. These places are more and more important as the climate changes.” These delicate areas of SEC are what drove the initial intent to map and understand the property as its future is determined.

More recent iNaturalist observations from the Sonoma Developmental Center, where to date there have been 12,475 observations of 1,097 recorded species.
Dan Levitis, who led the project as a volunteer and now works as Sugarloaf Ridge State Park’s Volunteer Coordinator and is a trained biologist, was the one faced with the huge task of recording as many species as possible at SDC. Luckily Levitis knew immediately how to begin documentation. He was already familiar with iNaturalist, an app that allows anyone to record and identify plants, animals, insects and fungi. What made using this approach special, Levitis says, is that iNaturalist isn’t just for trained biologists. It allows naturalists at any skill level to document what lives and grows in a given area, while drawing from a network of skilled professionals to confirm identifications so the observations become “research grade”.

Levitis and a band of SEC volunteers and local naturalists, among them a budding herpetologist, an California Academy of Sciences staff member, and a top iNaturalist observer for California, gave SEC insights into what’s going on ecologically on the SDC site. The mapping project uncovered a breadth of biodiversity that was unexpected and identified several rare species that were undocumented in the area before. “Previous assessments we’d been involved with for the SDC were based on pre-existing lists of species that were assumed likely to be there, instead of being based on actual observations on the property. There could have been all kinds of species missing from those lists that then would be hard to protect during development when it happens. The iNaturalist project turned out to be more fruitful than we expected, both in the number and variety of organisms we observed” says Caitlin Cornwall, SEC Senior Project Manager, who assisted Levitis on the mapping project. 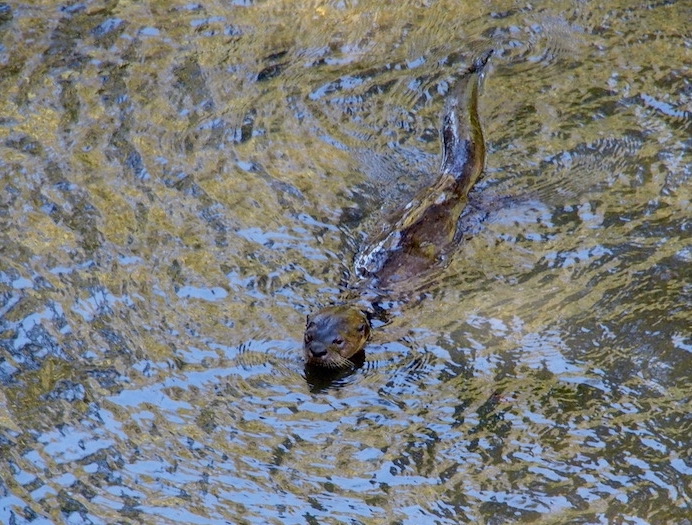 1,097 different flora and fauna (such as this river otter) have been recorded at SDC and counting.
The SDC property houses such ample biodiversity in its 945 acres largely because it is such a variable piece of land.  It includes a range of heights and sun exposures: steep places, grassy places, wet places, and forested places. This abundance of microclimates fosters biological diversity and is a part of why the property is important to preserve and protect. “We know from this project that the least developed areas are the most diverse,” says Levitis, “However, protected native wildlife are still moving through and using the most disturbed pieces of the property.”
Areas of the SDC property that have been impacted by invasive species still manage to thrum with life: the riparian areas such as the “Eldrige Marsh” still are home to native salamanders and turtles despite invasive bullfrog populations, and a thriving bird population makes their home there as well. However, these locations urgently need restoration and attention. SEC has removed fencing that hinders wildlife, repaired erosion problems, removed invasive weeds, and seeks more funding to continue this work. 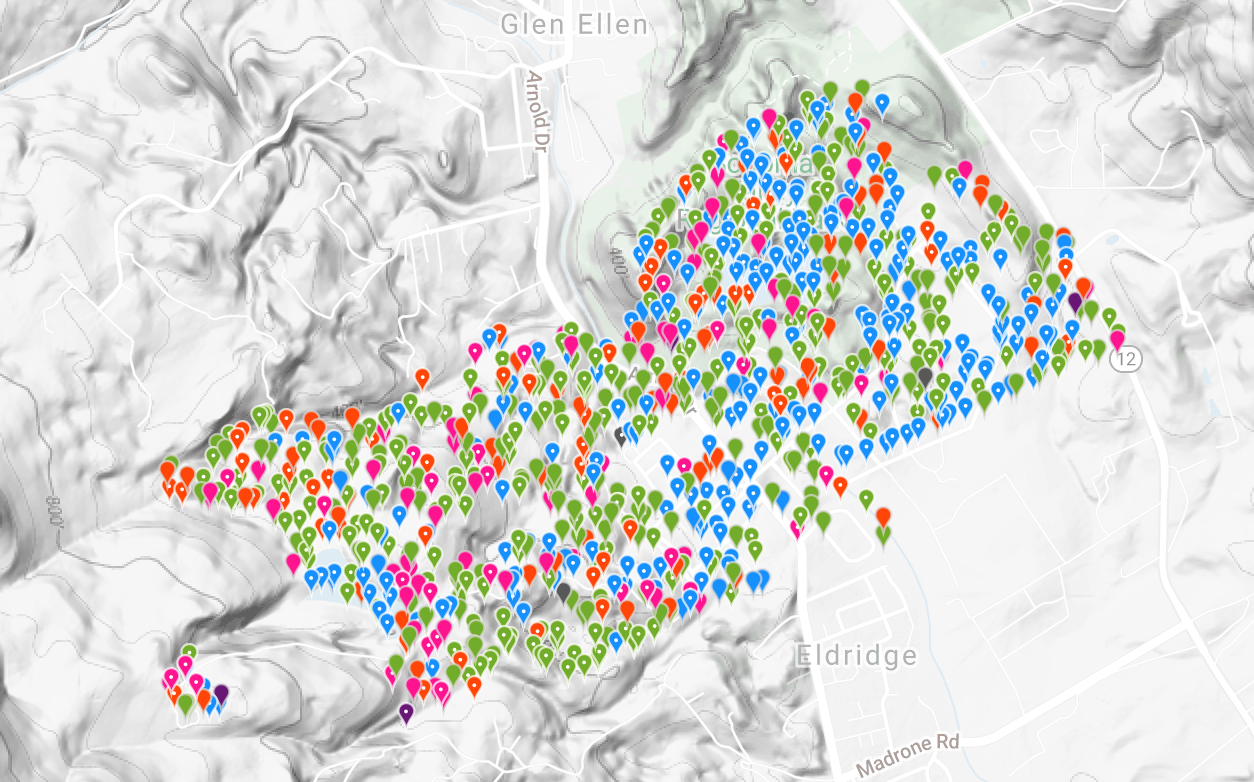 Above is a map of all the species observations recorded at the SDC campus. View the project on iNaturalist here.

Levitis adds, “SEC hopes to have a say in where housing is built on SDC, and how much, and also to directly aid in habitat restoration to improve groundwater recharge and value for wildlife.” Levitis is comforted by the fact that none of the three previously proposed plans suggested development close to or on where any of the rare or endangered species have been observed. “But one of the three plans proposed putting in a road along an old road which goes right through western pond turtle habitat,” says Levitis. “Our observations have been shared with the folks making the plans. Any development there needs to be carefully examined, and likely avoided.”

SEC submitted the data from Levitis’s iNaturalist project to Sonoma County’s planning department and will submit it again during the upcoming EIR process for the SDC Specific Plan. “What we have is irreplaceable data. No one else has anything like it,” says Cornwall. “Up to now SEC has used this data to make the general statement that the property has incredible natural resources that need to be protected,” says Cornwall. “Where this data will really shine is a few steps down the planning road, when it comes time to put onto planning maps development features like trails, benches, buildings, roads, and lights.”

View the SDC iNaturalist Project here
Want to get involved? There are still many opportunities to contribute to knowledge about the biodiversity of the SDC property. You can make your own observations on iNaturalist by downloading the application and following its instructions. Or you can get involved with SDC planning by signing up for updates and making a comment at engage@sdcspecificplan.com.
Get Involved at the SDC Specific Plan website