Yes on Measures K, J for a Better Sonoma 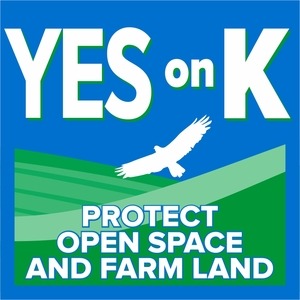 With so much zaniness surrounding the upcoming election, it can be hard to stay focused on the local races. But here are two measures that must not be missed, and that we at Sonoma Ecology Center strongly support:

This one is near and dear to our hearts, and not only because Sonoma Ecology Center helped draft a portion of it. Described by the Greenbelt Alliance as “the most important green measure in Sonoma County this year,” Measure K would extend our county’s preexisting community separators for another 20 years. It would also expand them in places like Sonoma Development Center, growing this crucial greenbelt to 53,576 acres countywide.

What exactly are community separators? They are swaths of open space and farmland between our cities and towns (this interactive map shows their location) that have been given an extra level of protection – specifically, they cannot be developed without voter approval. County voters approved these protections overwhelmingly 20 years ago, but now they’re set to expire. Let’s give them another 20 years by voting yes on Measure K.

If you’re a fan of our regional parks – and we sure are! – you’ll want to vote yes on Measure J. Besides their unparalleled beauty and recreational uses, our county’s 56 regional parks protect vital wildlife habitat and water resources.

To better fund the parks, this measure would create a half-cent sales tax in unincorporated Sonoma County, generating an estimated $9.5 million per year for the next 10 years. That money, overseen by a citizens’ oversight committee, would go directly to maintaining, expanding and improving our county-run parks and open spaces.

This measure needs a two-thirds vote to pass, however, so every vote counts!