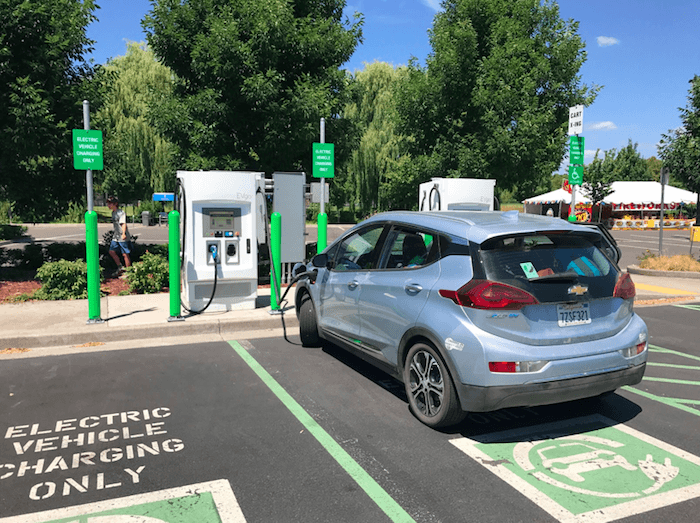 Sonoma Ecology Center Executive Director Richard Dale and his family are enjoying a road trip to British Columbia – and they’re making the drive in their all-electric Chevrolet Bolt EV. What follows is part three of Richard’s chronicle of the highs and lows of taking the Electric Highway from Sonoma to British Columbia. (Click here to read part one and here to read part two.)

Our friends in Seattle didn’t have a convenient way for us to charge the Bolt, so next morning, July 4th, I found two fast chargers within a mile or so of where we were staying, both on Harvard Street. The first, slightly closer one located in a parking garage, was a ChargePoint unit that worked well for 20 minutes and then stopped. The attendant I reached by phone reset the machine but it couldn’t be revived. The next one was at the Harvard Market parking lot, an EVgo 50 kW charger that worked fine and charged up the rest of the way in about 50 minutes. The rest of the day was spent doing more traditional Fourth of July activities: a hike, a beach barbecue at Lake Washington, and fireworks over Lake Union. Charging the EV may have been the most patriotic of these.

We left our friends in Seattle and headed north a short distance to the Edmonds ferry that would take us across Puget Sound to Kingston, and on to a camping spot at the north end of the Olympic Peninsula, in all about 80 miles. We set up camp and drove into Olympic National Park, up 5,000 feet to the alpine meadows of Hurricane Ridge. The scenery and wildflowers were well worth the trip, and we enjoyed watching our state of charge indicator climb steadily during the 18 miles back down the hill, leaving us not much further behind where we’d started.

We had dinner in Port Angeles, and used a free level 2 charger across the street at a local insurance agent’s parking lot. (A fast charger in the area hasn’t been working for several months). We drove back to camp and watched a beautiful sunset, a late one for those of us from more southerly latitudes, and finished the day with nearly 70 percent of a charge, plenty to make it to the Port Angeles ferry that would take us into Canada the next day.

We woke early and decided to see if we could get a spot on the early ferry to Victoria. These sailings are usually full in the summer so reservations are required, and our reservation was for later. We arrived a little before 7:30 and the attendant gave us a wait list number and let us in line. There was room, and we were put into a slot behind some big rigs. We then wandered upstairs and had a rather basic ferry breakfast as we sailed north, with the huge benefit of watching the scenery all around the Strait of Juan de Fuca catch the morning sun. We were in Victoria and through customs by 10. A simple settings adjustment put all the car’s displays into metric, confusing us for a bit, but also making it clear that our little car had now made the 1,000 miles from California to Canada.

We decided to explore Victoria and found one of several garages in the downtown area near the waterfront, though unfortunately we were too late to use one of the free level 2 chargers that came with the lot (which had a parking fee). We visited the Royal BC Museum and saw an interesting traveling exhibit on Egypt and its likewise interesting permanent First Nations exhibit. We checked the car later and moved it to an open charging station, gaining enough charge to carry us for the rest of the trip north, including to an Airbnb stop north of the city for the night.

The next day took us to our main destination for this trip, a cabin on Salt Spring Island. This involved a drive to Swartz Bay north of Victoria to catch a ferry to Salt Spring. These ferries run regularly, and we were on board with little fuss less than an hour after we started out from Victoria.

A nice family that parked near us on the smaller, al fresco parking and riding area these inter-island ferries offer was very excited about our Bolt. They were from Quebec and owned one, and were delighted to see we’d come from California in ours. We told them a bit about our trip, and they were a little puzzled that it had been any trouble at all. Apparently in Quebec as in many places in Canada, EVs are being fully integrated into the vehicle fleet, with fast chargers everywhere. The middle of the country where petroleum is still a major part of the economy isn’t as far along, they noted, but they felt it was only a matter of time. This echoed our experience in many parts of Europe we’d visited the summer before. Someday our innovative country will catch up.

We arrived on the island early, and spent time at the fabulous Saturday farmers market in Ganges before arriving at our little cabin near Long Harbor. It was very close to what we’d hoped to find: a quiet secluded spot over the water (about 150 feet up a steep path and stairs), with lots of interesting plants and animals waiting to be discovered. My wife Caitlin describes it as “North Coastal California with fjords.”

The island has several level 2 chargers, but it turned out that a regular 110-volt outlet with the higher current (12 amp) setting on the Bolt (1.3 kW) charged up the 15 kW we’d used overnight and would suffice for the time we were on the island.

We’ll leave this blog here, and perhaps pick it up again later as we make our way to other places. The bottom line: it’s not that hard now to drive an EV with a 200-plus mile range along the main interstate up the West Coast of the U.S. It takes some extra planning, and some inconvenience, like stops in strange parking lots and chargers that need to be monitored. But it’s certainly doable. It seems like the technology is improving constantly, and in a few years, trips like this one may hardly require any special thought. We hope so!