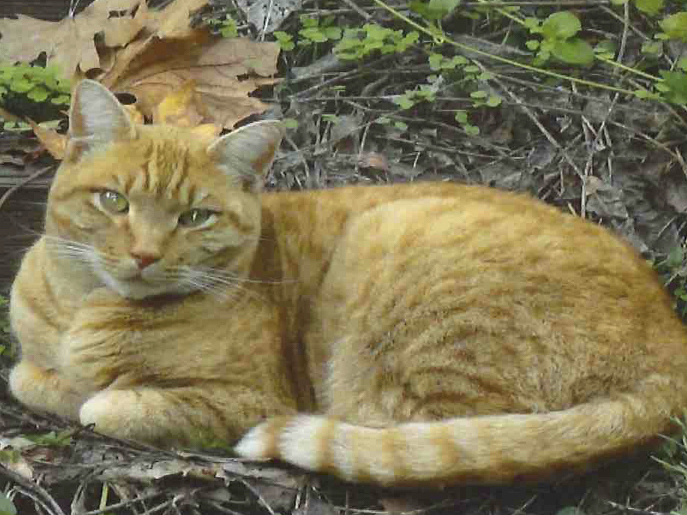 The wildfires of 2017 were harrowing for Sonoma Valley residents. For Deb Hennessy, they led to the loss of a four-legged friend.

In the early morning hours of Oct. 9, 2017, Deb, a Glen Ellen resident and longtime Sonoma Ecology Center employee, was roused by authorities with an urgent message to evacuate.

“We could see the fire from where we were,” she recalls. “And we were just waiting, and all of the sudden, up and down Warm Springs Road, the sheriff was driving with a bullhorn saying ‘Everyone evacuate immediately.’”

A self-described “cat lady,” Deb had a lot of felines to round up in a hurry—but with the help of her partner Jesse they gathered them up in bags and cages and placed them in Deb’s car. Among them, contained in a canvass bag, was a 3-year-old male orange tabby named Mordecai Jones.

“So the car was filled with cats and Lucy,” their dog, Deb said, while Jesse followed behind in the truck. “We didn’t really know where to go, but I had family in Santa Rosa. So we left about 1 or 2 in the morning on the 9th.” They went to Santa Rosa, and “just sat in the driveway all night. We didn’t know what to do.”

That morning, amid the chaos of smoke and flames and mass evacuations, Deb located a place in Cotati where they could temporarily keep their pets. “I was so exhausted,” she said. “I felt like I wasn’t thinking clearly at all.” But on the way there, as they passed the police station at Sonoma Avenue and Brookwood Avenue, something terrible happened.

“It was so hot, and I rolled down the window for Lucy, because she was panting,” Deb said. “And I didn’t realize Mordecai Jones had been working the canvas carrier he was in, he’d been tearing at it with his claws.”

In fact, he was loose—and when the window was opened a bit, Mordecai made his escape, jumping over the dog, through the window, out of the car and away. Deb looked all around for him, but he was gone. Eventually, Jesse suggested they go drop off the other animals and come back.

They didn’t find him later either, though it wasn’t for lack of trying. “Every single day I went there,” Deb said. The search for Mordecai had begun, and Deb never stopped looking, returning to the area more than once a week for the next three years.

“It broke her heart,” said Celina Briggs, who works alongside Deb in Sonoma Ecology Center’s administrative offices. “She felt so much guilt and grief for the longest time, but she never gave up. She searched and searched. She put fliers up everywhere and never stopped looking.”

“I thought I let him down,” Deb acknowledged. “I blamed myself. I just felt like, Oh my God, I lost my own kid during the fires. And I just went back every single weekend, and walked the neighborhoods, met with people and talked with people—a lot of homeless people. I whistled, I called.”

Deb’s searching led to many false leads, which she would drop everything to follow up on. Though discouraged, her determination never once waned in three years.

Against all odds, Mordecai was alive and well for all that time, having joined a cat colony not far from where he escaped. Eventually, a local organization called Forgotten Felines scooped up Mordecai to have him chipped and vaccinated—and discovered that he was already chipped and registered with Deb Hennessy of Glen Ellen.

On Monday, Nov. 30, Deb got the call that her cat Mordecai, missing for more than three years, was found.

“I didn’t believe it,” Deb said. “So many times people have told me they got him. And I said, ‘Are you sure?’”

Deb was already a fan of Forgotten Felines of Sonoma County, which provides affordable spay and neuter, vaccination and other services for cat owners. But now: “I’m so grateful to them.”

“Deb is indispensable to Sonoma Ecology Center, not only because she has reliably managed our books for 15 years, but because she is a gem of a person and everyone loves her,” said Sonoma Ecology Center Executive Director Richard Dale. “We’re so delighted that this wonderful thing has happened! It’s a hopeful story, and no one deserves it more than Deb.”

As for the prodigal cat Mordecai Jones, he is back home and settling in nicely. “I have to say, he is such a gentleman,” Deb said, noting the large male is not afraid of other cats, but not aggressive either. Mordecai and another cat, an old friend, are even sleeping in a heap together again.

“I know he knows where he is now. He remembers his house,” Deb said. “He’s doing good.”