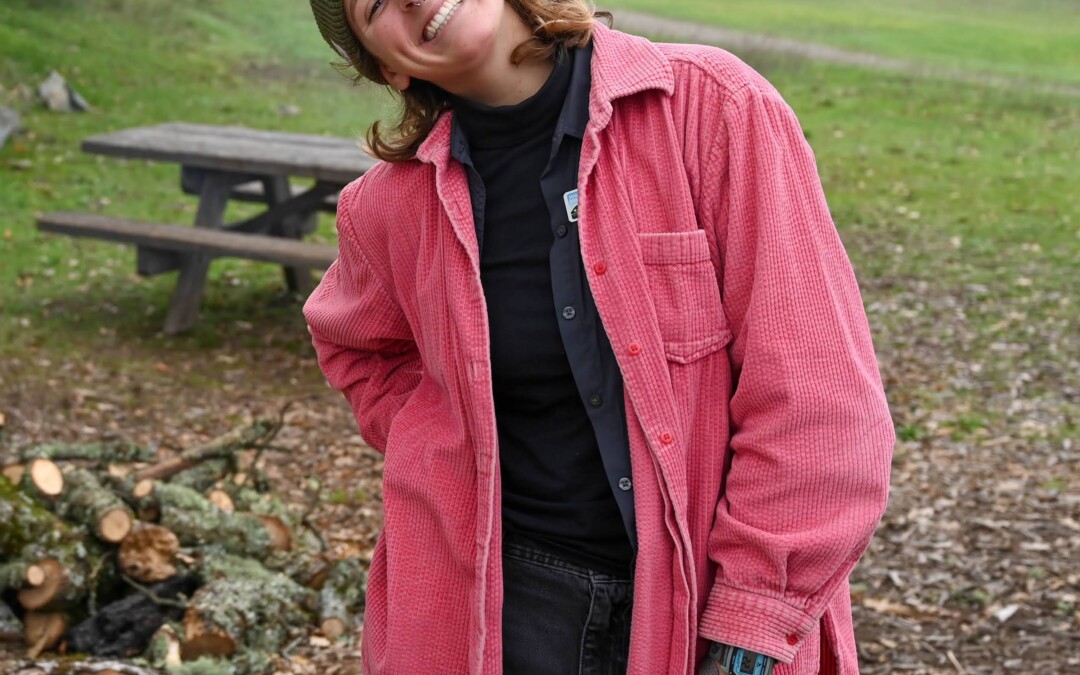 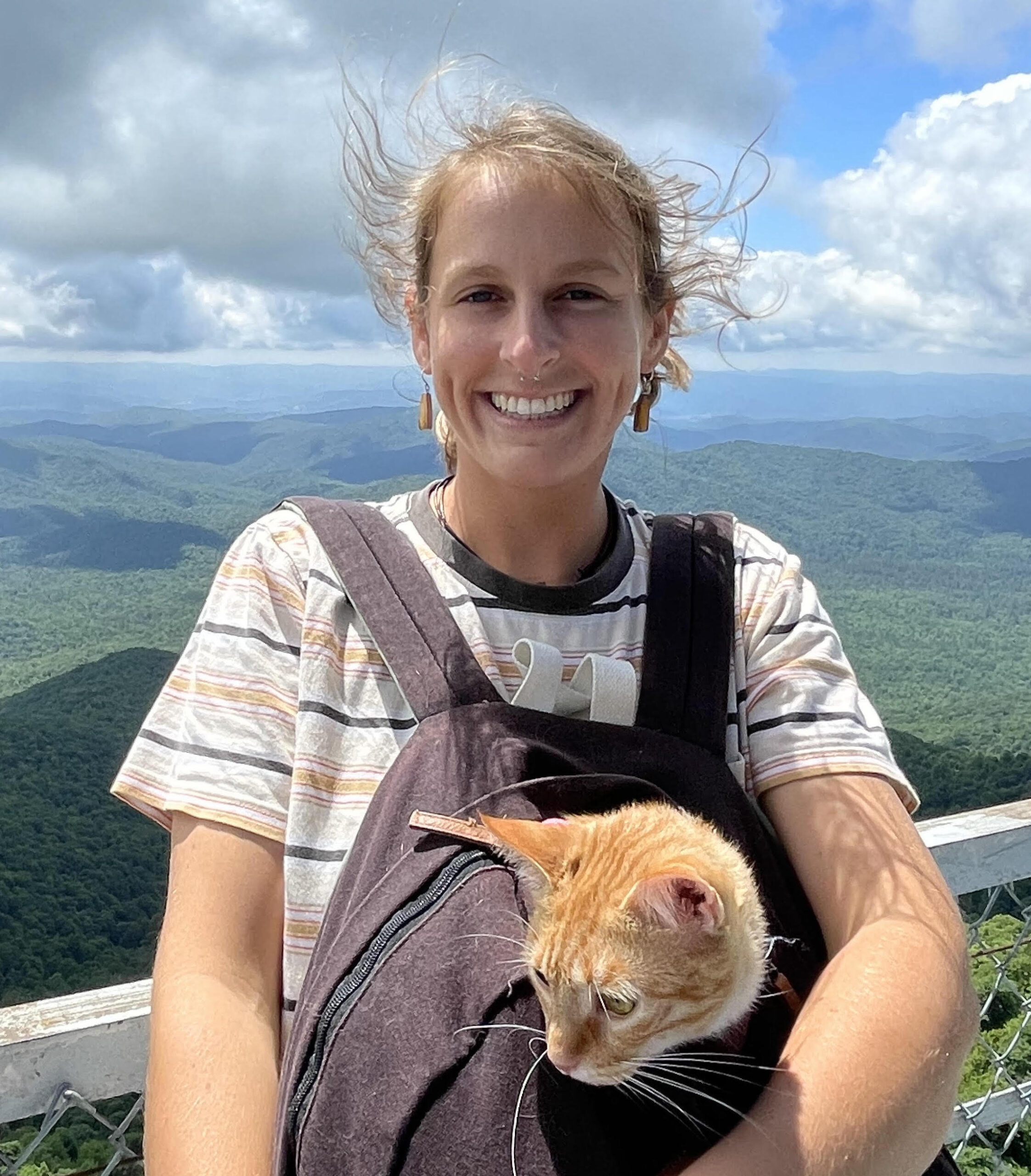 Cali Pearce joined our team as our first ever Americorp volunteer to help Sonoma Ecology Center bring it’s volunteer management system into the digital age and shape our volunteer culture. The voice behind flurries of cheery volunteer emails, Cali has made herself invaluable as she updates SEC’s volunteer infrastructure for the future.

Sonoma Ecology Center is home to an ever growing network of almost 300 volunteers who give the gift of their time, expertise and advice to daily operations at SEC programs across Sonoma Valley. These special community members power many aspects of day-to-day operations for Sonoma Ecology Center’s programs: from running the Sugarloaf Ridge State Parkpark kiosks, to aiding in local creek clean-ups, to pruning fruit trees at Sonoma Garden Park, our volunteers provide a wealth of knowledge that is truly invaluable.

“Many of our volunteers are retirees and have had these expansive careers and diverse experiences to be able to help the park in unique ways. I can’t even imagine everything that they’ve done. It’s amazing to work with people who have so many different backgrounds”

Cali has been the force behind the start of holding regular Volunteer Socials meant to create consistent and connected community-building events for our expansive network of volunteers. Having regular get-togethers where volunteers share a meal, go on a hike, or learn a new skill together creates an opportunity for those who work solely in one area of our programs to cross-pollinate with others, make friends, and learn about different aspects of the SEC volunteer program. Best of all, the socials provide an opportunity to give back and show our appreciation to our community of dedicated volunteers.

Cali sat down with us to answer a few questions about working with the Sonoma Ecology Center volunteer program and what she’s doing to improve our systems, from learning about Better Impact to finding ways to say “Thank You!” to our volunteers:

What did you study in school?

Is this your first time with Americorp?

Yes, I alway knew I wanted to do some sort of full time service opportunity and originally had wanted to join the Peace Corps but have since realized that there are plenty of domestic people and places that need help and so I chose to apply for AmeriCorps.

What made you want to come help Sonoma Ecology Center?

Well I had applied and gotten an interview with the AmeriCorps VIP program, a position that I wasn’t sure that I wanted based on the partner sites they were looking to place me at, but decided to take the interview anyway for the experience. In interviewing with my now AmeriCorps supervisor, she mentioned there might be one more non-profit partner site that could be an option, but she was not certain that it would work out. Upon hearing about SEC and what they do, I was immediately interested and told her that I was interested. At the end of my interview she offered me the position and I told her I had a couple more interviews I needed to do before I could make a decision but I was definitely interested if I could be placed with SEC. Eventually I accepted the position and a couple of days before I began my trek out to CA, the SEC-AmeriCorps contract was finalized (much to my relief).

What are you passionate about?

I am passionate about the environment and politics because I think that as much as they shouldn’t be conflated, they very much are. Growing up in a coastal town on the Jersey Shore, I was very aware of the anthropogenic effects on the environment and always wanted to learn more so I could actually do something to help the earth. I have always had the idea that I could help save the planet, so much so that I- a lover of bacon, meatballs, and porkroll egg and cheeses- became vegan six years ago, once I found out how bad the meat and dairy industries are for the environment. I became passionate about politics when I began to understand that much of my life is impacted by politics. Once I realized this, I also realized how many people and places are a lot worse off than I am due to various social and political institutions and most of the time, things don’t change unless policy does. With this in mind, I hope to someday be in a position where I can make these policy changes to create a happier and greener earth for all people.

What has been the hardest part of working on our volunteer system?

The hardest part of working on the volunteer system has been remembering all of the volunteers names! Just kidding (kind of), so far the hardest part has been trying to recruit new volunteers. We have great groups of volunteers at each of the SEC programs, but it would be great to get more people involved, especially if they are part of a community that we aren’t, giving us insights that would make each program more accessible to all people. However this is a difficult task, because it’s not easy to ask hardworking people to spend their free time volunteering.

What has been your favorite part of working on our volunteer system?

I love meeting all of the volunteers! They are always so kind and have so many stories to tell which I appreciate.

What do you like most about Sugarloaf and the Garden Park?

I like how beautiful both of them are in their own way. Sugarloaf is awesome to hike and has great views and the Garden park is so beautiful with all of the different plants all curated in a way that is both visually and ecologically pleasing. I also appreciate that both of the volunteer coordinators give me a lot of autonomy in my work.

What do you do for fun in your free time?

I like to hang out with friends, hike with my cat Marm, skateboard, surf, and read.

You hike with your cat?

Marm, the cat, is not an outdoor cat, but she really enjoys being outside, so I began putting her in a harness to take her outside with me. A lot of people think that I had to harness and leash train her as a kitten but truthfully I got her when she was already a year-and-a-half old. She didn’t love the harness, and she still doesn’t, but it’s a means to get outside, so she accepts it. I first took her hiking on our road trip moving back to NJ from FL (she has now been on two road trips). Our first stop was in Georgia, and I wasn’t sure how well it would go because she had only ever been walking around my front yard, not a trail so I grabbed my backpack, shoved her bed in there so it was comfy and carried her from the car to the trail head. As soon as her paws hit the path, she was on a mission and was surprisingly great at keeping a steady pace. Since then she’s also hiked with me in North Carolina, New Jersey, and now California! I love to bring her with me because I truly enjoy spending time with her and I love to see people’s reaction when they see a hiking cat.

Learn More About our Volunteer Program