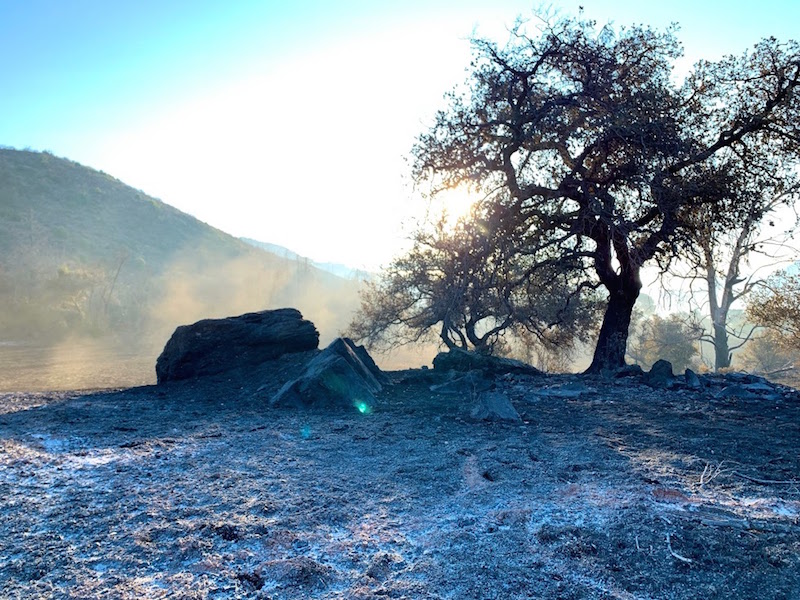 With Red Barn Gone and Revenues Down, Valley’s Beloved State Park Must Regrow and Rebuild

Park operators from Sonoma Ecology Center are still taking stock of the damage at Sugarloaf Ridge State Park following the Glass Fire. And even though an estimated three-quarters of the park burned—nearly as much as three years ago—Sugarloaf appears to have lost mostly vegetation and some trail infrastructure such as steps and bridges.

Those things are replaceable, with a notable exception: the iconic Red Barn, which burned as the fire swept through the park’s backcountry.

Another notable exception, according to Park Manager John Roney, is lost revenue due to the park’s ongoing closure. “This is the second time this year, and the third time since 2017, that we’ve been forced to close Sugarloaf for an extended period,” Roney said. “And that means we’re losing revenue that we don’t get back, even though it will take money to rebuild.”

Sparked Sept. 27 east of Calistoga, the Glass Fire has consumed over 67,000 acres in Napa and Sonoma counties. The park remains closed, and Sonoma Ecology Center staff access currently is limited to the “front country”—chiefly the Visitor Center and other developed parts of the park, and the campground area—where they are acting as liaisons to the agencies working in the park in a post-fire capacity. SEC staff members will fully assess the damage once they are able to access the trails.

So far it is clear that upcoming needs for Sugarloaf will include trail rehabilitation, erosion control and bank stabilization, new signage and picnic tables, and monitoring post-fire invasives.

“Just as we did in 2017, we plan to work with volunteers and partners to repair damage to trails and bridges, and safely reopen the park as soon as possible,” Roney said.

“The rebuild after the Tubbs Fire cost us tens of thousands—but would have been many times higher without the help of volunteers and generous donations of money and materials from the community.”

Staff members also plan to lead a renewed series of “Fire Recovery Hikes,” just as they did after the 2017 fires. The popular series teaches the public about the resilient nature of our fire-evolved environment.

The Red Barn, a popular destination for backcountry hikers, was built by the Hurd family in 1918 as part of their homestead. It was last visited on Saturday, Sept. 26, by Roney and others—and the fire started the next day.