The Sonoma Ecology Center’s (SEC) Restoration Department has been hard at work this season on a host of projects in service of helping local landowners.

What’s our crew been up to lately? Recently our team of restoration specialists have been busy stewarding the creation of fire-safe landscapes while keeping close to mind the best ecological practices to maintain healthy ecosystems and cleaning up defunct and harmful trash out of our local open spaces. The planning and dedication that goes into our team’s data-driven solutions and thoughtful restoration techniques deserves a big round of applause! And besides that – it’s real hard work!

What does the Restoration Department do?

The SEC’s Restoration Department is dedicated to the restoration, stewardship and enhancement of over 4,000 acres of private and public lands around Sonoma Valley. Throughout Sonoma Valley and beyond, our trained professionals provide ecological restoration services including: biological site assessments, native plant seed collection and propagation, invasive plant mapping and treatments, stream bank stabilization and erosion control, and fire fuel management.

Some of our favorite projects that our team got involved with this season are highlighted below, all of which were executed successfully through the expertise and skills of our valued restoration technicians and project managers: 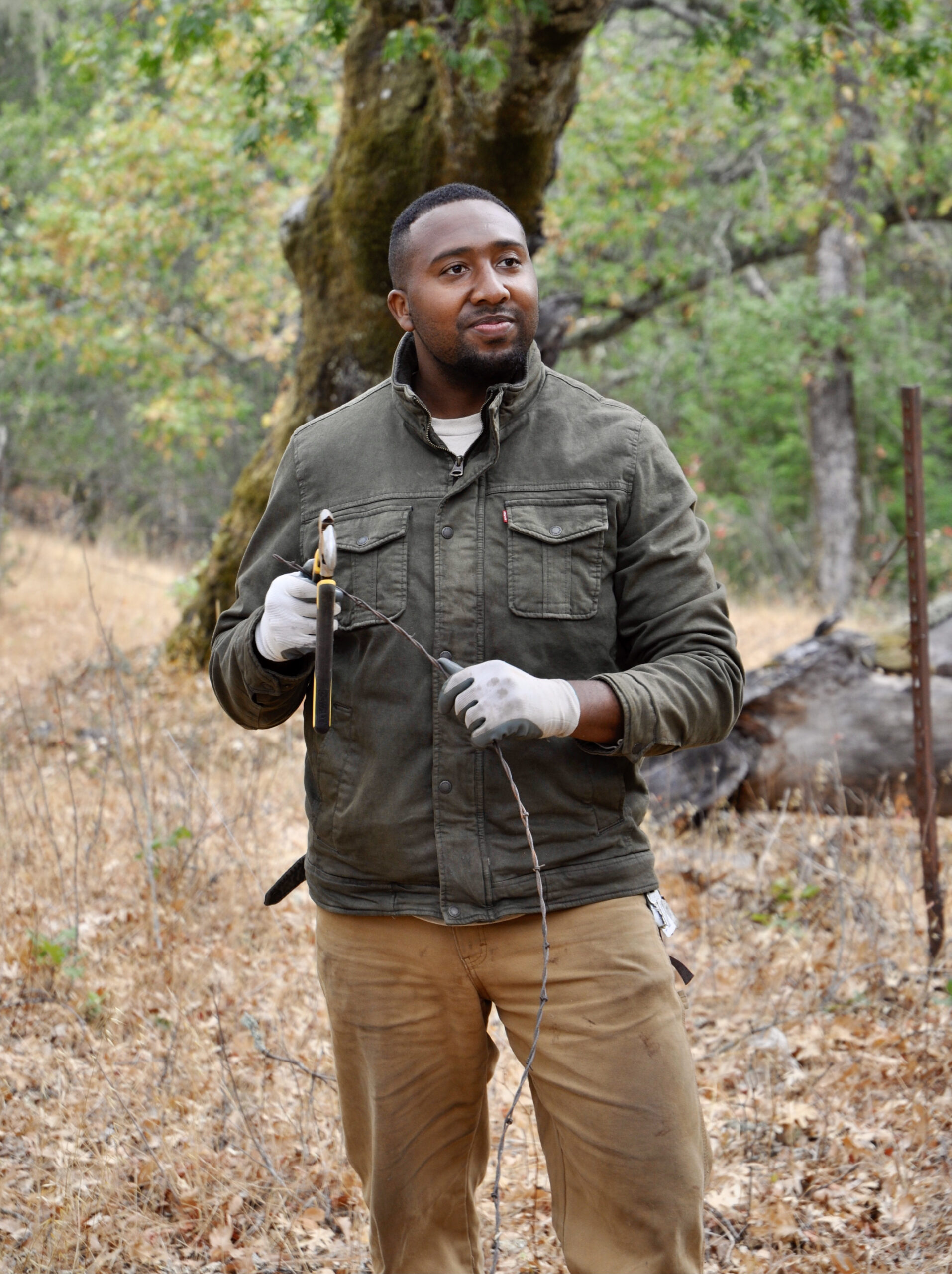 During the 2017 Nuns Fire the Oakmont subdivision in Santa Rosa was surrounded by fire – several homes burned and thousands of residents were evacuated. Following the fire, the Oakmont Village Association has been working with the Sonoma Ecology Center’s Restoration Program to reduce fuel loading and fire risks within and along the perimeter of the subdivision.

One high priority area for treatment was identified along Anella Creek, a small ephemeral stream flowing from Annadel State Park. Between Oakmont Drive and the park boundary, invasive blackberry vines as well as native coyote bush had overgrown the stream channel, creating “ladder” fuels that could carry fire into the canopy of oaks and maples along the creek.  The thick growth of vines and brush also threatened to impede passage of high flows, increasing flood risks.

Before and after images of clearing work that our Restoration Crew did to reduce fuel loads out of Anella Creek.

SEC’s Restoration Crew, led by Project Manager Ross Adams, implemented a “resilient landscape” plan designed by Senior Advisor Ellie Insley and Design and Implementation Project Manager Jon Kanagy.  Technicians Francis Gantos, Dana DeLew, Kevin Jones, Joe Joe Clark, and Jared Davis worked for several days in hot weather to implement this plan, which focused on removal of invasive plants and ladder fuels within 100 feet of homes along Anella Creek.  Native trees and shrubs were pruned to separate branches from ground fuels, but were left in place. Small dead branches were removed from the channel, but larger logs were left to provide aquatic habitat for fish and other species.  Woody material that was removed from the riparian corridor was chipped and spread as ground cover to reduce the potential for erosion.

The SEC Restoration Crew will return in winter or spring when soil moisture is higher to trim invasive plants and plant native grasses and shrubs.

The Sonoma Developmental Center (SDC) was closed in 2018 after more than 150 years of operation.  While state and local government agencies develop a plan for future use of the facility and grounds, a number of natural resource management issues are being addressed by the SEC Research and Restoration Programs with funding from the State Coastal Conservancy.  Research Program Manager Steve Lee is coordinating these efforts, and worked with the Restoration Crew to identify several hundred yards of old fencing that crossed the critical wildlife habitat corridor along Sonoma Creek.  The crew cut vines, branches, and logs from the fence wires, removed wires from posts, and carried the wire out of the riparian zone for disposal.  With the fences removed, deer and other wildlife can now move freely within the riparian corridor of the creek. 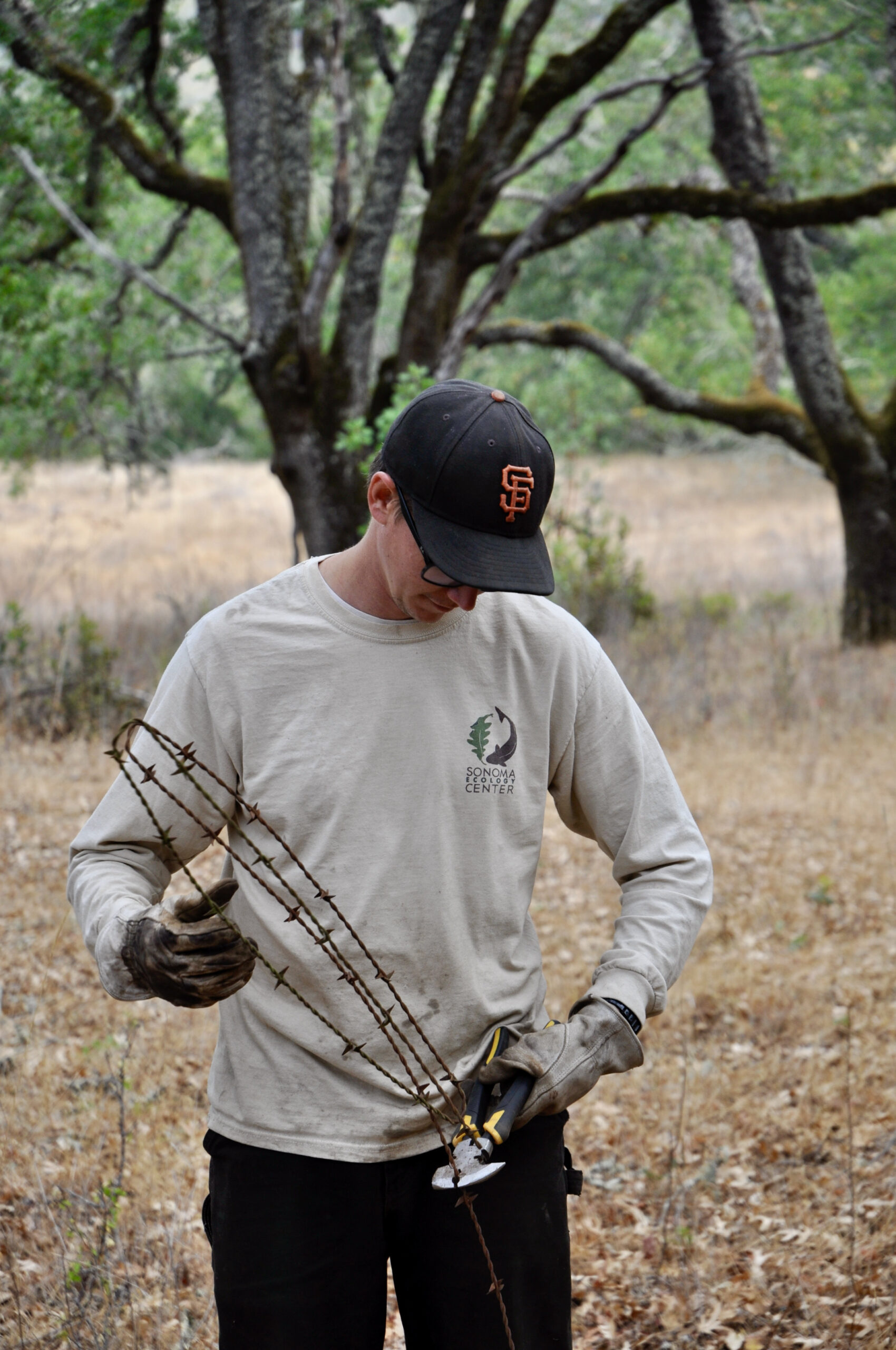 Not only did the work of the SEC Research and Restoration Programs pull many yards of unused fencing off of the SDC campus but they reestablished the wildlife corridor that runs along the Sonoma Creek making the area far more effective in providing a sheltered and quiet space for deer and other critters to move about freely and easily without interaction with humans.

At the David Cost property at Wolf Run near Glen Ellen, the SEC Restoration crew cut large manzanita shrubs killed in the 2017 Nuns Fire.  These dead shrubs provide a high fuel load for any future fires, and could act as “ladders” allowing flames to reach the branches of the surviving oaks on the hillslope.  The crew carried the cut branches from the first 100 feet of hillslope to a pile in a cleared area behind the Cost house.  These branches will be chipped and spread on the bare soil surface at the base of an adjacent hillslope to help prevent erosion.

At distances farther than 100 feet upslope, the crew uses a method called “lop and scatter,” which refers to cutting branches and distributing them evenly over the land surface to prevent vertical piling of fuels and to distribute the fuel load horizontally.  Overall, the fuel load on the hill will be reduced due to the removal and chipping, and the remaining load attributable to the “lopped and scattered” branches will be more dispersed.  Any future fires will as a result be less intense and less likely to convert from a ground fire to a crown fire.

Crown fires, in which flames move from treetop to treetop, are generally the most dangerous and difficult fires to control.  Fires can be prevented from climbing into higher branches by trimming ground and “ladder” fuels that provide a pathway for fires to become crown fires.

Three of our crew members getting in a long day of removing and scattering dead manzanita branches at the Cost Property. From left to right: Dana DeLew, Jared Davis, and Kevin Jones.

Our Restoration Department has more than 25 years of successful experience performing natural resource management projects to the satisfaction of public and private clients.

To contact our team about projects or to request our services, please email  restoration@sonomaecologycenter.org or call 707-996-0712 ext. 116.