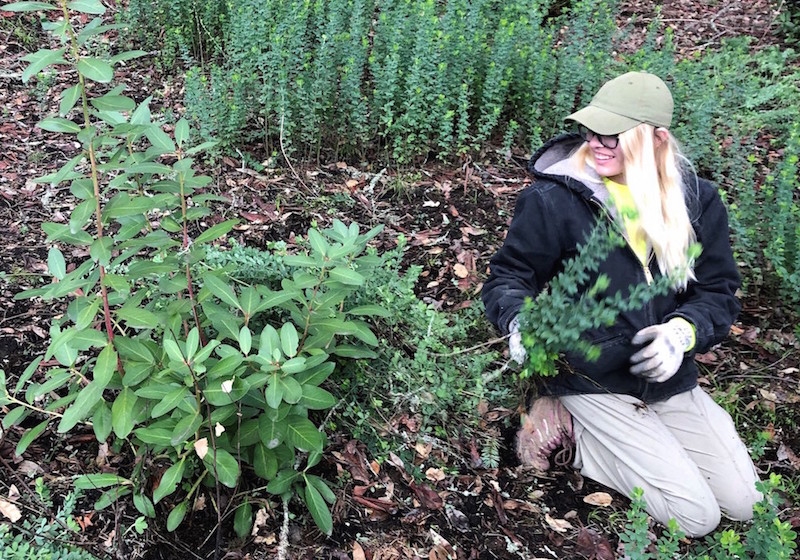 Restoration Program Manager Jason Mills has some announcements this month, not only about the work his team is doing but about the team itself, which is growing.

“I wanted to officially welcome Ariana Lease and Garrett Gradillas to the Restoration team,” he said, adding that “Ariana and Garrett both blew me away with their positive attitudes and approach to this specialized work.”

Ariana (shown above in foreground) grew up in Santa Rosa and earned a B.S. in Environmental Studies from San Francisco State. She specializes in natural resource management and conservation, and recently completed a year-long internship with the Golden Gate National Parks Conservancy. Garett obtained a Forestry degree from Humboldt State with an emphasis in wildland fire management. He went on to work for the U.S. Forest Service, where he helped lead fire and fuel reduction projects. Welcome to you both!

As for the work itself, Jason’s team has been taking advantage of the wet earth to remove invasive plants while it’s easier to do. Earlier this month, he said, “we assisted the Petrified Forest with some post-fire fuel reduction and invasive broom work. It came out super easily and we managed to clear about an acre of understory ladder fuel.”

French broom is one of the worst invasive plant species in our region. As Sonoma County Regional Parks notes, “Left alone, their dense thickets cover hillsides, choke out native plants, and displace insects, birds and animals. And they’re particularly tough to remove. They resprout easily after being cut down. And when the broom dies after seven or eight years, its woody skeleton is highly flammable.”

Locals interested in learning more about invasive plants and how to fight them are encouraged to join us for an Invasive Plant Workshop on Saturday, Feb. 23, 2019 at Sonoma Garden Park. This workshop is presented by Sonoma Ecology Center in conjunction with the California Invasive Plant Council. To register, click here.