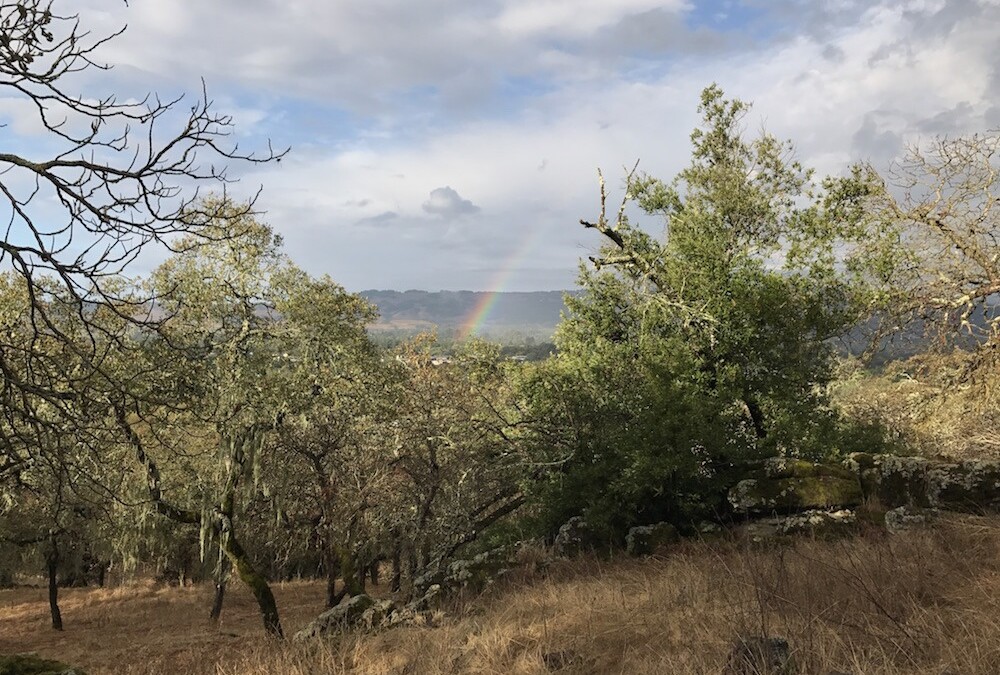 This October is shaping up to be much nicer than last year’s! The month announced itself with a strong, warm rainstorm, bringing an unexpected 1.6 inches of rain to Sonoma Valley. That was enough to activate the seed bank, causing grasses to pop up and reducing (though not eliminating) the chance of further wildfires this season. It also gave us a lovely little rainbow, as seen above from Montini Overlook.

Then on Oct. 8 – the anniversary of the start of last year’s fires – friends and neighbors packed Sebastiani Theatre for a special screening of “Wilder Than Wild,” a sobering documentary on wildfire and resilience. The event was well attended, the film timely, and the panel discussion afterward fascinating and encouraging. Overall the event was a great success, and reminded us, again, why we love this Valley.

Last year, at this time, our situation was dire. The fires were finally going out, but only after raging out of control since the night of Oct. 8. Ultimately they burned well over a quarter of Sonoma Valley and almost three quarters of Sugarloaf Ridge State Park. But less than a year later the park was fully reopened, and Sonoma Valley was very much back on its feet.

Still, there is much to do. As the rainy season draws near, we’re especially concerned about erosion – burned vegetation is less good at holding hillsides together – and flooding. But fire, flooding and erosion are all manageable problems as long as we commit to wise land stewardship.

To guide the Valley towards that goal, we’ve produced a new pamphlet to help residents – including those living in fire zones, or who are still rebuilding – re-landscape their properties with the best land-use practices in mind. For people on rural land especially, it can be hard to reconcile the wish to be safe, while still enjoying and fostering beautiful, healthy landscapes and natural areas. That’s why we developed “Re-Imagine Your Landscape: Fire Smart, Water Wise and Wildlife Friendly.” A pdf version of this pamphlet is available HERE or at www.sonomaecologycenter.org. For a print copy, send a request to info@sonomaecologycenter.org.