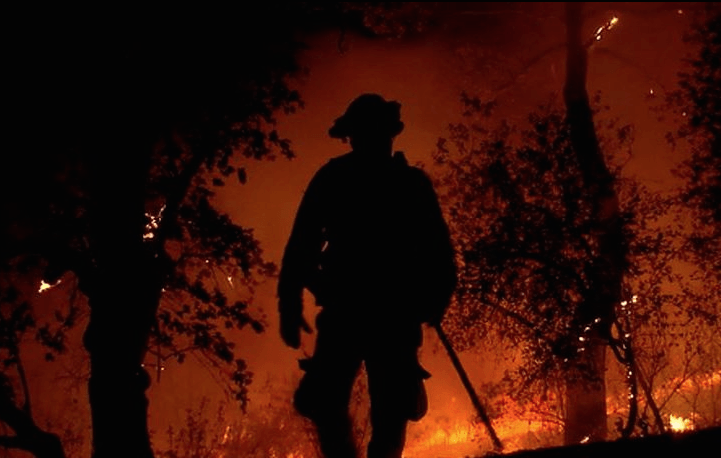 On Oct. 8, 2017, several fires ignited around the North Bay including in Sonoma Valley. They spread quickly and uncontrollably, burning huge swaths of land and turning the lives of Valley residents upside-down.

Exactly one year later, on Monday, Oct. 8, Sonoma Ecology Center is marking the anniversary with an exclusive film screening at Sebastiani Theater – one of several events we’re hosting in recognition of the wildfires that burned more than 30,000 acres and a thousand structures in Sonoma Valley alone.

The screening of “Wilder Than Wild,” a documentary film on wildfire and its causes, begins with refreshments at 6 p.m. and concludes with a thought-provoking panel discussion. Sonoma County Sheriff Rob Giordano, fire ecologist Jared Childress, and Sonoma Ecology Center’s own Caitlin Cornwall are among the panelists, and the discussion will be moderated by legendary TV journalist and Bay Area guide Doug McConnell (see below for short bios on all the panelists).

The following weekend, Sonoma Ecology Center hosts a unique live art performance at Sonoma Garden Park on Saturday, Oct. 13, and at Sugarloaf Ridge State Park on Sunday, Oct. 14. “The Color of Emotion,” by international artists Anna Senno and Olga de la Iglesia, asks participants to don white clothing and paint themselves in colors representative of how they are feeling. The free interactive performance connects colors to places and emotions, and is meant to be a healing and transformative experience for all.

Also around the anniversary of the fires, Sonoma Ecology Center is leading more Fire Recovery Walks – free guided tours led by our trained ecologists demonstrating how our local landscape bounces back from wildfire – with the first one on Saturday, Oct. 6 at Sugarloaf Ridge State Park, followed by several others. People attending previous walks have told us they found it to be greatly therapeutic to see the land heal for themselves.

Please join us for any or all of these events, which we are proud to present in honor of our many friends and neighbors affected by the wildfires of one year ago. We were there alongside them then and remain by their side today, helping our Valley and its people to rebuild and to heal.

For a full list of events and a remembrance of the fires, see our Fire Anniversary page.

More on ‘Wilder Than Wild’ Screening and Panel Discussion

“Wilder Than Wild,” directed by Kevin White and produced by Stephen Most, takes us on a journey from the Rim Fire of 2013 to the North Bay wildfires of 2017. Along the way, we learn how prescribed fire can reduce the need for reactive fire suppression. We meet a California tribe renewing its tradition of cultural fire. And we see how scientists, resource managers and others are building consensus on how to manage the lands we love and depend on.

Sonoma Ecology Center, in partnership with Sebastiani Theatre Foundation, is sponsoring this Oct. 8 screening at the Sebastiani Theatre in Sonoma Plaza to commemorate the one-year anniversary of the North Bay fires. The film starts at 7 p.m., with light refreshments and wine served at 6 p.m. Tickets are available with a suggested contribution of $20 and may be purchased online at wtwsonoma.brownpapertickets.com. A limited number of complementary tickets to this screening are available; email requests for complementary tickets to garland@sonomaecologycenter.org or call 707-996-0712, ext. 125.

The panel discussion following the film will feature these expert panelists:

Doug McConnell, the panel’s moderator, has worked in Bay Area television since 1983. He is currently the host and co-creator of “OpenRoad with Doug McConnell” on NBC Bay Area. He has also produced and hosted “Bay Area Backroads” on KRON, “OpenRoad: Exploring the West” on national Public Television, and “Mac and Mutley” on KPIX and the Discovery Channel. As co-founder of ConvergenceMedia Productions, Doug also develops and oversees many other media projects in support of parks and open space agencies and nonprofit organizations. He has received regional Emmys and other broadcast awards during his long career in television and has been recognized for his extensive public service.

Jared Childress is a fire ecologist, a certified wildland firefighter, and a prescribed fire specialist for Audubon Canyon Ranch. He has served as land steward and community wildfire organizer for the East Bay community of Canyon, director of education and watershed restoration at Spaulding Marine Center in Sausalito, and has conducted extensive field research tracking mountain lions and wolves and monitoring coastal rangelands. Jared is a member of the Central Coast Prescribed Fire Council, the Society of Rangeland Management, and the California Native Plant Society.

Rob Giordano is sheriff of Sonoma County, and helped orchestrate the emergency response to last year’s wildfires. An East Bay native, he began his law enforcement career with the Pittsburg Police Department and joined the Sonoma County Sheriff’s Office in 1996. He was appointed sheriff in 2017. Rob lives in east Santa Rosa and in his free time he enjoys, among other things, hiking in Sugarloaf Ridge State Park.

Caitlin Cornwall is a biologist who manages the Research Program at Sonoma Ecology Center, where she has worked for 20 years. Her work communicates watershed health using indicator systems, creates diverse partnerships for healthy watersheds, and integrates climate and ecosystem services into planning, from the parcel scale to the region. A Sonoma County native, she holds degrees in biology and botany, co-leads the North Bay Climate Adaptation Initiative, is the project director for Sustainable Sonoma, and is the lead author of Sonoma County’s climate vulnerability assessment and the Climate Resilience Roadmap for Sonoma County.

Stephen Most is an author, playwright and documentary filmmaker and the producer of “Wilder Than Wild.” Other films he has worked on include “River of Renewal,” “Oil On Ice,” “A Land Between Rivers” and “Green Fire.” He is also writer/producer of “Nature’s Orchestra,” about Bernie Krause’s soundscape ecology expedition in the Arctic National Wildlife Refuge, which was broadcast in the PBS series “Natural Heroes.” His 2017 book “Stories Make the World: Reflections on Storytelling and the Art of the Documentary” includes a chapter about the making of “Wilder than Wild.”

Kevin White is an award-winning producer, director and writer and the director of “Wilder Than Wild.” He founded Full Frame Productions in 1984 and cofounded the nonprofit Filmmakers Collaborative SF in 1988. Kevin has produced and directed dozens of films including “Speaking Up,” “A Land Between Rivers,” “From the Ground Up,” “Freedom’s Desert” and many more. His films have been screened at the Berlin Film Festival, San Francisco Film Festival, Hot Springs Film Festival, Wild & Scenic Film Festival, International Wildlife Film Festival and others, and have earned him multiple awards including Emmys.