Biochar Goes to Hollywood (and Forestville, and Sonoma Garden Park) 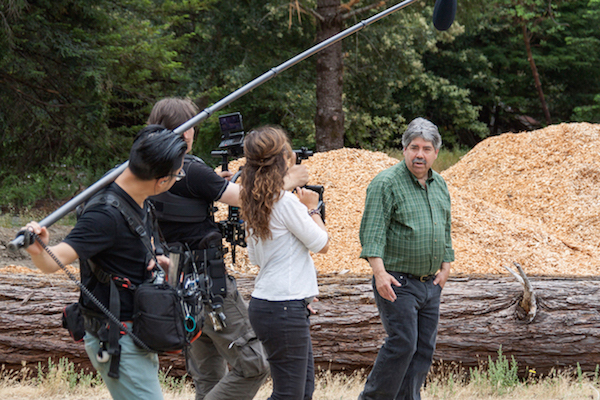 These are exciting times for our biochar program and its director, Raymond Baltar, who is currently having a minor brush with fame due to his appearance in “Ice on Fire,” an HBO documentary on climate change solutions produced and narrated by Leonardo DiCaprio.

Raymond doesn’t seek the spotlight, but he is always ready to discuss the merits of biochar, and HBO “is surely the biggest platform I will ever have since they are releasing the film internationally,” he said. He was interviewed for the film while working under contract with the Redwood Forest Foundation in 2017 at a biochar project near the town of Percy in Mendocino County.

Last month “Ice on Fire” was accepted into the Cannes Film Festival, and it premiered this month on HBO, which made it available for free online streaming for a limited time. (For those people unable to see the film this time around, we’re working on setting up a local screening.)

“Ice on Fire” begins with an overview of the dire problems presented by climate change. Then about a third of the way in it starts focusing on potential solutions – and that’s where Raymond appears with a five-minute discussion of biochar, a form of charcoal that can amend soil, conserve water, remove pollutants and sequester carbon.

Experts on climate change and drawdown – efforts to remove carbon from the air – are starting to notice biochar’s useful qualities. A recent U.N. IPCC Special Report named biochar production and use as one of the least expensive and most easily scalable carbon drawdown strategies that can be employed immediately.

Thanks to the film, Raymond said, “Many, many more people will now have at least heard the term, and many more discussions can be had with those willing to try it, to help fund it, or to create legislation to help scale its use.”

Closer to home, Raymond and the rest of the Sonoma Biochar Initiative crew have been prepping for a biochar forum on Wednesday, June 19, 5:30-8 p.m. at the Shone Farm Pavilion in Forestville. A number of speakers representing different aspects of the biochar world are attending, including some providing updates on state government initiatives, biochar producers, the forestry sector, and farmers.

Locals interested in acquiring some biochar for themselves are in luck: come to the weekly Harvest Market at Sonoma Garden Park for a bag of blended biochar as a thank-you gift for donations to Sonoma Ecology Center’s biochar program. A $12 donation gets you one bag, or $20 for two bags. Each 1-cubic-foot compostable bag contains 1/3 North Coast Biochar and 2/3 Grab and Grow’s Real McCoy Organic Blend Compost. Proceeds benefit Sonoma Biochar Initiative, a Sonoma Ecology Center program.