The Life Cycle of Chinook in Sonoma Creek 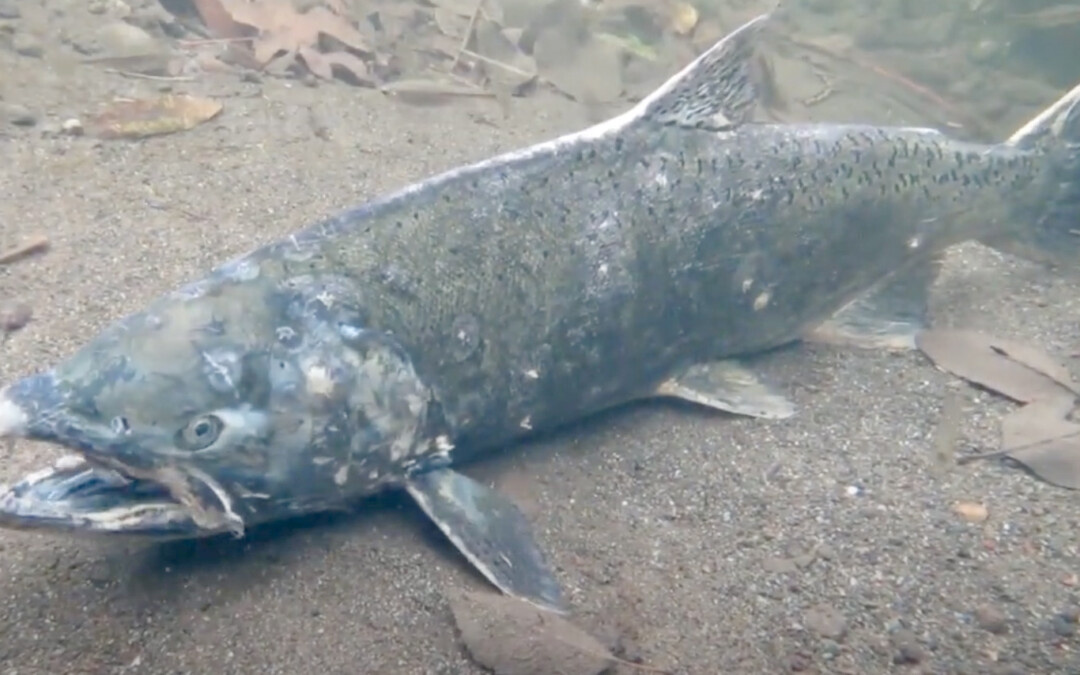 The Chinook salmon that have been making their run up the Sonoma Creek watershed are reaching the end of their life cycle. In the video below you can catch a glimpse of changes their bodies undergo as they enter a rapid senescence – a process observed in salmon in which they physically deteriorate quickly after spawning begins. Note the salmon’s fins and how its skin has turned rough and dull. Much of the deterioration has to do with the salmon’s run upstream, where it scrapes on rocks and rubs off protective oils. Their tail fins are particularly damaged from beating repeatedly against rocks while their dorsal fins generally are less abraded. By the end of their long trip, lesions begin to develop on the skin and mouth as the salmon begin to lose their health. Many miles of estuary and stream were navigated in the past weeks to reach this point. A number of Sonoma Valley residents, including our scientists, had the good fortune to observe and experience a moment of wonder and appreciation for these magnificent fish as they reach the end of their arduous journey.

These salmon went through significant changes making the transition from ocean dwelling to freshwater fish, readying themselves to reproduce. Both male and female Chinook showed up to spawn about the same time in local streams, as water levels began to drop after the major rain event we experienced in late October. Females found pools to lay their eggs, typically in deeper water with larger gravels than our other resident salmonid–steelhead. Males compete for spawning females, and dominant, generally larger males spawn more successfully than smaller males, but several males will often attend a spawning female, who can lay eggs several times in her nest, or “redd.” A dominant male will often leave right after spawning to court another female, so less dominant “satellite” males that wait nearby are also often reproductively successful. A female will defend her redd until she can no longer maintain strength and she then goes through a period of rapid senescence, dying 8-12 days after spawning.

Judging from the time of year that these runs occurred, young fish, “fry,” will emerge from the creek gravels after several weeks of incubation in January and February. For those that survive, downstream movement may start right away. If we have enough rain in the winter months and there’s adequate flow, another life phase occurs from April through June, when the young Chinook “smolts” outmigrate to the estuary and eventually to the ocean.

SEC’s research team has been keeping tabs on Chinook in our watershed and collecting reports of fish carcasses showing up on creek banks. They are assisting California Department of Fish and Wildlife (CDFW) and California State Parks to collect samples of deceased hatchery Chinook to help identify which hatchery they have come from. Hatchery fish have a wire coded tag that helps scientists to locate where they are from, how old they are, and where they were released.

How do we know which fish to collect for the CDFW and which to leave alone? We are able to differentiate hatchery Chinook from the wild fish by looking between the tail and the dorsal fin of each fish for the adipose fin. This small fin right above the tail is removed on hatchery fish before they are released for later identification. The adipose fin doesn’t grow back and it doesn’t harm the fish to live without it.

Our research team saw many fish with their adipose fin still intact. This could indicate that there are wild as well as hatchery fish spawning in our streams, though not all hatchery fish have their adipose fins clipped. We’ve also found outmigrating Chinook smolts on Sonoma Creek in recent years indicating that Chinook are at least sometimes succeeding in spawning here. It’s exciting to think that Chinook, even wild Chinook, might be reproducing in our streams, but without further research it’s hard to draw a conclusion. As the seasons progress, we look forward to learning more.